As the name suggests, this squash makes a delicious spaghetti substitute! Find out here all you need to about growing your own spaghetti squash and how to use them.

Spaghetti squash is really growing in popularity! It offers a healthy alternative to pasta and a great way pack more veg into your diet. But it’s not just people that love it. The spaghetti squash plant produces beautiful flowers that attract loads of pollinators and bees to your garden. Discover how to grow this versatile vegetable in your garden or any other outdoor space.

Spaghetti squash is a variety of winter squash (Cucurbita pepo) in the cucurbit family (Cucurbitaceae) that was cultivated in Japan. Spaghetti squash is an annual, herbaceous plant that is valued for its health benefits, taste, appearance and early yield. As is typical for winter squash, the plants also form large, heart-shaped leaves on long, tendril-like shoots. The funnel-shaped flowers are very large, decorative and vibrantly orange-yellow. After pollination, the elongated, cylindrical fruits develop from the flowers from August onwards. When fully ripe, they usually turn sunny yellow or light greenish yellow, depending on the variety. When preparing spaghetti squash, it soon becomes clear where the name comes from. After cooking, the flesh breaks down into long, spaghetti-like fibres that can be cooked in a variety of ways and can even serve as a delicious substitute for real spaghetti.

If you want to grow spaghetti squash, sow your seeds directly outdoors from mid-May onwards or start them indoors on a windowsill as early as mid-April. It is best to use a nutrient-poor, unfertilised soil, such as our Plantura Organic Herb & Seedling Compost, as this stimulates healthy root development. Place the spaghetti squash seeds about 2cm deep into the soil so that they are only lightly covered. The temperature should be above 22°C for germination. If sowing directly and temperatures are below 10°C, cover the seedlings with fleece to prevent them from freezing. Make sure to keep the planting soil evenly moist. Pumpkin seeds usually germinate quickly and many seedlings can be seen after just 7 to 10 days.

For spaghetti squash seedlings started indoors, prick out the plants into nutrient-rich planting soil and larger pots once they form their first heart-shaped leaf. From the beginning of May onwards, harden off young plants. This means placing the young plants outside in a sheltered spot during the day and for increasingly longer periods, but bringing them back indoors at night. Hardening off accustoms the plants to direct sunlight, wind, and temperature fluctuations. From mid to late May, you can safely transplant the young squash outside. Spaghetti squash is a plant that demands lots of nutrients to fruit, so use a soil rich in compost to help ensure a good harvest. If you make your own compost, you can also plant the squash directly next to the compost heap or mix a generous amount of it into your soil. Make sure that the soil layers below the surface are permeable too. The best location for spaghetti squash is sunny or only partially shaded at midday. For the sprawling squash plants, keep a plant spacing of around 1 to 2m.

Can you grow spaghetti squash in pots? If you do not have a veg patch, you can actually cultivate this winter squash in containers. For this, choose a pot with a volume of at least 20 litres to accommodate the large plant. To keep your plant manageable, cut the tip of the shoot off after four fruit sets form. This allows the plant to concentrate more energy on fruiting rather than plant growth. If planting space is limited, it is a good idea to weave the long tendrils together with the fruit onto a trellis so that the pumpkin grows taller rather than wide. Secure the heavy fruits to the trellis with a net or even a pair of tights to prevent them from breaking off. Read our article on squash climbing supports for more tips.

How to grow spaghetti squash: pruning, fertilising and more

After planting, it is important to water spaghetti squash plants regularly. Water directly onto the soil, and with lukewarm water, as the squash tends to react to cool water temperatures with reduced growth and yellow leaves. The soil around the spaghetti squash plant should not be wet, but evenly moist. The plants need plenty of water, especially during flowering and fruiting. It is best to water early in the morning or in the evening to avoid evaporation in summer.

As a heavy feeder, spaghetti squash needs regular fertilising. There is no need to add extra nutrients until after they have been transplanted. If you have enriched your soil with compost or a slow-release fertiliser such as our Plantura Tomato Food in advance, you do not need to fertilise in the first period after transplanting either. The nutrients in our slow-release fertiliser last for about three months and provide the pumpkin with everything it needs, especially potassium, which is essential for fruiting. After three months, however, you should always top up with fertiliser.

Tip: For potted plants, it is better to use a liquid fertiliser. Here we recommend a fertiliser with a specially adapted nutrient balance for heavy feeding veg plants, such as our Plantura Liquid Tomato Food. 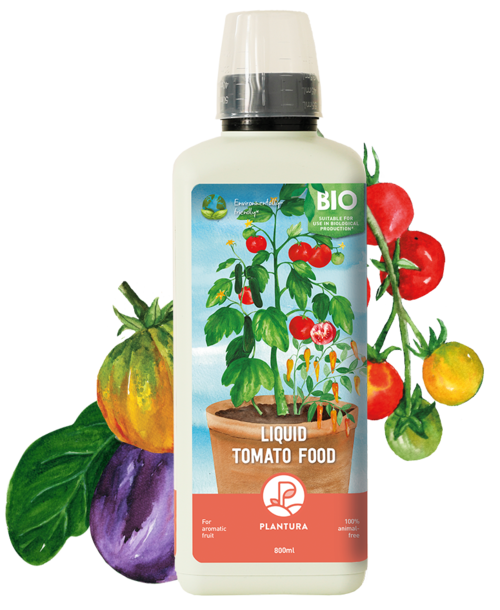 To improve your yield, a good trick is to prune the spaghetti squash. As recommended for potted plants, pinch off the shoot tip as soon as a sufficient fruit set, around 3 to 5 fruits per plant, has formed. With this method, the plants will focus more energy on producing fewer, larger fruits rather than lots of small squashes.

When to harvest spaghetti squash

Spaghetti squash can be harvested quite early in the season, between August and late October. To avoid fruit damage, make sure to harvest the last of your crop before the first frost. If you want to store the spaghetti squash, leave a part of the stalk attached to the squash when harvesting. Cut the fruit from the shoot with a sharp knife or secateurs.

What does ripe spaghetti squash look like? A ripe one is between 15 and 30cm long and weighs 1 to 3kg. It takes about three months from the onset of fruit to a ripe, hard-skinned spaghetti squash. You can tell when a pumpkin is ready for harvesting when the stalk is dry, hard and has turned brown. The intensity of the fruit’s colour depends on the variety; many varieties, such as ‘Pyza’, are light yellow to golden yellow when ripe.

Spaghetti squash is relatively easy to store due to its hard and robust skin. Ideally, store the spaghetti pumpkin in a cool, dry and frost-free place and position it upright with the stem pointing upwards. The squash will then keep until around January. Alternatively, you can freeze squash cut into small pieces, either raw or already cooked, or preserve them in vinegar and sugar.

Spaghetti squash is super healthy and loaded with nutrients. Besides magnesium, calcium, iron, beta-carotene, and fibre, it also contains a lot of water and potassium, which stimulates kidney and bladder function when eaten. Spaghetti squash is pretty low in calories too, though in comparison to together squashes, it contains fewer vitamins.

Can you eat all parts of a spaghetti squash? While the innards of spaghetti squash are edible, its skin is not. Simply scrape out the flesh and leave the hard, inedible skin.

There are seemingly endless ways to prepare the spaghetti squash. However, the fact you can use it as a spaghetti alternative is pretty special. There are a couple of ways to make spaghetti squash pasta – by boiling or baking. For the boiling method, prick the skin several times with a fork and place the whole squash boiling water for 20 to 30 mins. Then, cut open the squash, remove the seeds and scrape out the spaghetti-like fibres. Alternatively, cut the raw squash in half, remove the seeds and bake in the oven until the skin turns brown. Then, again, scrape out the squash noodles with a fork. From there, simply serve the squash spaghetti with your favourite pasta sauce.

Along with the squash flowers, which are popular for stuffing or frying, spaghetti squash seeds are also edible. Clean and soak the seeds in water overnight to remove the remaining flesh. Then dry, season and roast them in the oven with a little oil for a crunchy snack or salad topping.

Courgette is another member of the cucurbit family which has a similar mild flavour to the spaghetti squash. Discover more about the most beautiful courgette varieties. 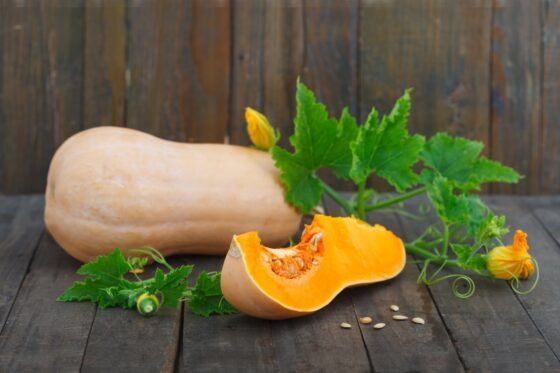