When to plant potatoes, how long do potatoes take to grow, and when to earth them up? Here you will learn everything you need to know about growing and earthing up potatoes.

Potatoes (Solanum tuberosum) are easy to grow yourself and are an essential part of any self-sufficient garden. As well as knowing how to chit and plant potato seeds, it is also important to know when and how to earth up the potatoes. Here you will learn how to successfully grow potatoes and which potato tubers to use.

The potato belongs to the Solanaceae family and is closely related to the tomato (Solanum lycopersicum) and aubergine (Solanum melongena). Originally from South America, it arrived in Europe in the 16th century.

But what do potato plants actually look like? Potato plants usually reach a height of 60 to 100cm. They form thick, luscious green shoots upwards from the starchy tubers underground. The leaves are pinnate in shape, slightly to very hairy, 10 to 30cm long and overhanging. In early summer, from mid-June, the white, pink or purple five-toothed potato flowers appear. These flowers ripen into inedible, tomato-like, green berry fruits with potato seeds by late summer.

Underground, the potato develops roots and lots of small tubers. Depending on the variety and the weather, you can expect a yield of between 700g and over 1kg per plant.

Seed potatoes: which potatoes can you plant?

What is the difference between normal cooking potatoes and seed potatoes? Basically nothing. If you want to grow potatoes on a large scale, however, you must buy seed potatoes from the grower. Potatoes are covered by the Seed and Plant Material Act. This means that seed potatoes, which are intended for commercial cultivation, must be officially certified. This ensures, on one hand, that the grower’s variety is not propagated without their consent and, on the other, that no infected tubers and potato diseases come into circulation. Seed potatoes in all shapes and colours are available to buy in garden centres and from specialised growers.

Can you plant normal potatoes? Of course, a hobby gardener may accidentally drop a normal eating potato into the soil, where it will form new daughter tubers. However, many potatoes are treated with sprout-inhibiting agents so that they do not start sprouting while in storage. The agent is absorbed into the tuber after application, so it cannot simply be washed off. When buying potatoes, therefore, make sure that they are untreated. In organic farming, such agents are generally prohibited.

When do you plant potatoes?

Spring is the best time to plant potatoes – from the beginning of April to the end of May. At this time, the soil should be fairly moist to dry and loose. Make sure you know the ripening time of each variety, so whether they are early potatoes or late ones.

For potatoes to grow well, they need the right soil and location. Potato plants prefer a full-sun location with loose, well-drained and nutrient-rich soils. Sandy soils and loose loam soils are ideal, but potatoes can also thrive in peat and heavily clay soils, provided water can drain off easily. Potatoes do not tolerate waterlogging, as the tubers quickly begin to rot in the soil. A soil pH of around 5.5 to 7.0 is ideal. The potato plants can tolerate lime rich soils up to a pH of 8.5, but you should then refrain from applying additional lime. Alternatively, growing potatoes in pots is an option if you have a limited space such as on a terrace, patio, or balcony. Choose a loose, permeable and nutrient-rich potting soil for this.

As potato plants have relatively high nutrient requirements, we recommend growing legumes (Fabaceae) such as beans (Phaseolus vulgaris) or peas (Pisum sativum) in the crop rotation the year before potato cultivation. These plants fix atmospheric nitrogen in the soil. Growing winter greens is also an ideal pre-crop to potatoes, as this adds a lot of organic matter to the soil. The combination with various other vegetables and herbs has a positive effect on both soil quality and potato yield. You can find out more about the advantages and ideal companion plants for potatoes in our article dedicated to the topic.

Chit your potatoes (pre-sprout) for four to five weeks from the beginning of March on a bright and warm windowsill. This method ensures a harvest two to three weeks earlier and allows you to grow varieties with a mid-late ripening time. In this way, the potatoes can usually be harvested before the dreaded late blight (Phytophthora infestans) wreaks havoc. Take care when planting, so that the long shoots of the sprouted potatoes do not break off.

Recap: how to chit potatoes

Tip: Divide potatoes: Potato tubers can also be divided. However, this must be done before sprouting, so around the end of February. Cut potatoes with a sterile, sharp knife, making sure that both halves have eyes (tiny buds) and let the cut dry out. The shoots will later form from the eyes. Divide the tubers well in advance of planting to ensure the wound has time to heal and no pathogens in the soil can take root.

When planting out, the most important questions to ask are: How deep to plant potatoes and how far apart do you plant them? The optimal planting depth for potatoes is 6 to 10cm with a spacing of 30 to 40cm between each seed. Keep a distance of 60 to 80cm between each row.

The planting time for potatoes begins from April to May. Use a trowel to dig suitable holes for the tubers. Alternatively, use a garden hoe to make a long furrow and plant the potatoes one by one. Place the pre-sprouted tubers with the sprout facing upwards. Now cover the tuber with soil and water. After a few weeks, the first green shoots will emerge from the soil.

When the plant foliage has reached a height of about 20 to 30cm, it is time to earth up. This helps avoid the tubers turning green and bitter due to sunlight. Creating a mound of soil around the potatoes can also increase the yield. The mounded soil encourages roots to form along the shoots, improving water and nutrient uptake. You can also combine earthing up with weeding between the rows. Particularly in early potato cultivation, when there are still frosts, you can earth up to protect the foliage. Create the mounds in the evening, as the foliage will be upright and the mounded soil will not weigh the plant down. Follow these steps:

Step by step: earthing up potatoes

Sowing potatoes: can potatoes be grown from seed?

In theory, potatoes can also be grown from seed, but in practice only growers do this. For the hobby gardener there are no advantages to sowing potato seeds. For one thing, there is a high probability that varieties have been mixed during pollination. This means the next generation from the seeds is probably not pure, but a hybrid instead. Secondly, seedlings take much longer to form tubers. The harvested tubers are quite small in the first year after the seeds are planted in February and hardly produce any yield. Only when the harvest from the first year is planted out in the following spring is the yield about the same.

All green parts of the potato plant are poisonous to humans and animals. Green parts of the tuber are also inedible. They contain the alkaloid solanine, which causes typical signs of poisoning such as nausea, vomiting, and drowsiness and can also lead to death in high doses. Potato tubers without green spots, however, are completely harmless and can even be eaten raw.

To ensure that your plants continue to thrive after planting and earthing up, further potato plant care is essential. Find our special article with the best practices for weed control, watering and nutrient supply. 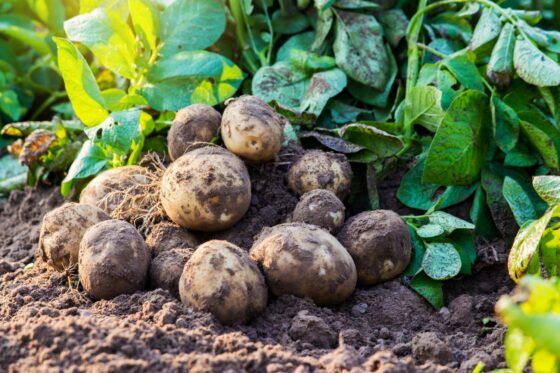 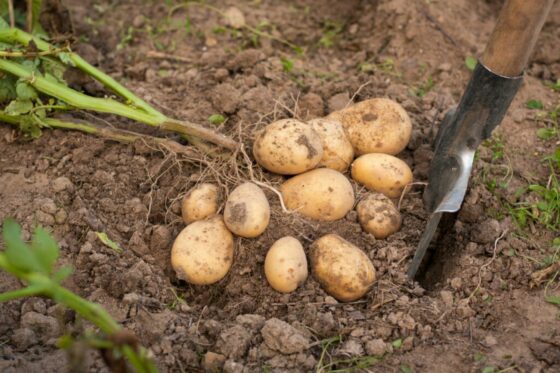 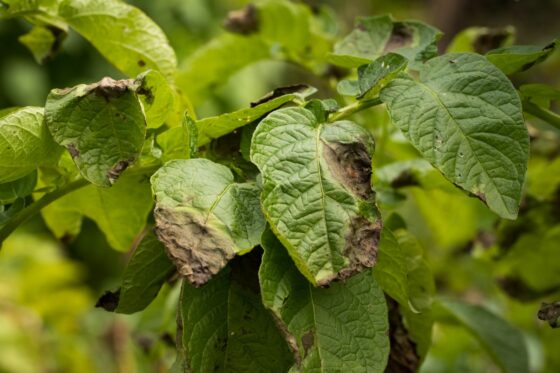 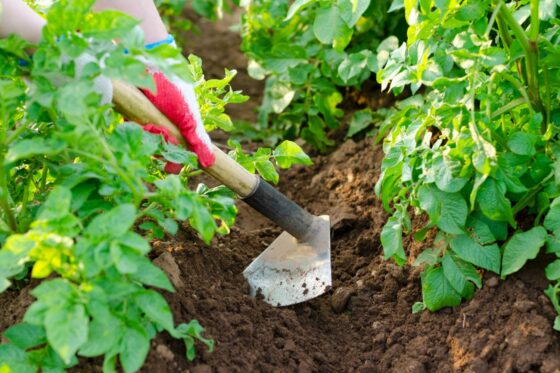