After an abundant harvest, it is important to store your cauliflower properly. We show you how to freeze and preserve cauliflower.

After weeks of waiting and tending your plants, the first cauliflower heads are ready to harvest. Depending on the growing season, harvesting time will be between June and October. Harvesting cauliflower at the right time is crucial. Cauliflower plants (Brassica oleracea var. botrytis) ripen rather unevenly, which is not exactly a disadvantage: a single crop of plants can be harvested over a period of one to six weeks, depending on the variety and the weather. Nevertheless, it can happen that too many of your delicious cauliflowers ripen at once and must be preserved. Here we will guide you through how to harvest cauliflower, how to store it for as long as possible and how to preserve it.

In summer and autumn, you can reap the rewards of your cauliflower plants – and they need to be harvested as soon as they are ready! Before cooking the cauliflower, however, you have to prepare it first. Below you will find tips to help you tell when is the best time to harvest it and how to go about it.

When to harvest cauliflower

The exact time your cauliflower is ready to harvest depends both on the planting date and variety. The weather also has a huge impact on when the white florets ripen. Cauliflower can be significantly affected by temperatures that are too cool or too warm, which can result in an early or late harvest. Conveniently, however, many cauliflowers planted at the same time will usually ripen gradually over a time window of one to six weeks. This stretches out the harvest time a bit, meaning you do not have to harvest everything at once. Harvest the white flowerheads when they are still firm before they look fluffy and shoot, or before they change colour.

Tip: Cauliflower should not be harvested too early. But equally, if you harvest it too late, the quality and flavour will suffer. If you cut off the heads before they have reached their final size, you will still get the typical cauliflower flavour. Depending on the variety, the plant will sprout and form small florets after the initial harvest.

Tip: Harvest your cauliflower as and when needed so that it is as fresh as possible and preferably early in the morning. Covered by its own foliage or a light fleece, it will also keep on the stalk for a few weeks longer.

How to cut cauliflower

You do not need a lot of equipment for the cauliflower harvest. Always cut your cauliflower with a sharp knife to reduce the risk of damaging the flowerhead. This will keep it fresh longer and reduce moisture loss. When harvesting, cut well below the base of the flowers. Immediately after harvesting in the early morning, the flowerhead should be cooled down with 0 to 4 °C cold water. Be sure to keep the cauliflower clean so you won’t have to clean it as much later.

If you want to enjoy the delicious white florets outside the cauliflower season, you need to store them properly. Storing the delicate cauliflower can be tricky so here are our best tips so that you can continue to enjoy cauliflower for as long as possible after the harvest.

How to store cauliflower

Cauliflower, like broccoli (Brassica oleracea var. italica), releases a lot of water quickly after harvesting and takes on a wilted, rubbery texture. However, if stored correctly, it can be kept fresh for up to six week. Cauliflower is very sensitive to the ripening gas ethylene, which some fruits and vegetables release as they ripen. The gas stimulates the cells of the cauliflower to become active, causing it to wilt and spoil more quickly. So avoid storing your cauliflower next to tomatoes and fruit that ripens after picking, such as apples.

How to store cauliflower in the fridge

Cauliflower can be stored in the fridge for some time. If it is freshly harvested, with leaves still on and unwashed, it can be stored at 0 to 4 °C for up to 14 days. Cauliflowers that have been harvested young will keep for up to six weeks at a constant temperature of 0°C, over 97% relative humidity, in the dark and isolated from other types of vegetables.

Tip: Water loss can be significantly reduced by wrapping the cauliflower in cling film or a damp cloth.

How to clean and store cauliflower

Before you prepare and cook cauliflower, you should clean it. Due to the intricate shape of its florets, cauliflower offers a lot of nooks and crannies for dirt to collect, which is why it is important to wash it well before eating. First remove the leaves and separate the individual florets from the main stalk. Remove any brown, discoloured and damaged florets when cleaning the cauliflower. Then wash the cauliflower florets under running water and let them drain in a colander before cooking.

Tip: If you cook cauliflower, it will only keep for a short time in the fridge afterwards. It is therefore worth cooking only the amount of cauliflower you need and using up any leftovers the next day.

How to preserve cauliflower

The tasty cauliflower florets can be preserved for a long time using a few different methods. Here is our guide to preserving cauliflower.

One of the best ways to preserve cauliflower is to freeze it. The nutrient rich cauliflower is a valuable source of vitamins which differs from some of its fellow brassicas, such as kale (Brassica oleracea var. sabellica), because it can be frozen raw without blanching. Before you freeze cauliflower, cut the individual florets from the cauliflower head, wash them and let them drain in a colander. Then portion the washed cauliflower and put it in the freezer. If you are short on time when it comes to cooking, you can add the cauliflower without defrosting it first.

To make cauliflower easier to digest and to extend its shelf life, it is often blanched. This is also the first step to boiling or pickling the florets. To blanch, place cut cauliflower florets in boiling salted water for a few minutes until they are just al dente. You can preserve the white colour of the cauliflower by adding a generous dash of citric acid to the water. Then drain the florets and rinse with cool water.

To preserve five heads of cauliflower in jars, place the florets into the jars. Pour over two litres of boiling salted water until the cauliflower is covered. Screw the lids loosely onto the jars, as air must be able to escape during the boiling process. Boil the jars at 100 °C for at least 20 minutes. This can be done, for example, in a high, casserole dish filled with water and placed in the oven. Alternatively, you can place the jars in a large saucepan of water on a hob. After boiling, screw the lids on tightly and turn the jars upside down and leave to cool.

Like almost any vegetable, cauliflower can be preserved by fermenting it. To do this, cut the raw cauliflower into florets and wash them. Then make a two to four percent brine by dissolving 20 to 40 grams of pure salt in a litre of water. Then layer cauliflower florets as tightly as possible in the jar, leaving only 3 to 4 cm of space below the rim. Place a fermentation weight on top of the cauliflower and finally pour in the brine. The fermentation weight should be completely covered with brine. Close the jar tightly and leave somewhere at room temperature for five to seven days – this is how the fermentation process gets started.

After another two to three weeks of gentle fermentation in the fridge or a cool cellar, the fermented cauliflower is ready to eat. It will keep for several months – especially if the rim of the jar is kept clean.

There are many ways to enjoy cauliflower – boiled, steamed, breaded or battered, in soup, baked in the oven or even raw. Unlike growing, which we cover in more detail in our article planting cauliflower, cooking cauliflower is much simpler.

Tip: Did you know that the cauliflower leaves are edible too? The outer, older leaves are not as tasty, but the younger ones are delicious in a creamy soup or stir fry.

Can you eat raw cauliflower?

Yes, you can eat cauliflower raw. It is often used in salads or enjoyed as a tasty snack with a dip.

Can you eat green cauliflower?

Yes, you can, because green cauliflower is like green asparagus (Asparagus officinalis). When the leaves cover the cauliflower flower and protect it from sunlight, it remains white. However, as soon as enough sunlight hits the flowerhead, it produces the green pigment chlorophyll, resulting in a green discolouration. Depending on the variety, your cauliflower may also turn purple or orange. Romanesco is a good example of a cauliflower variety that turns green.

Cauliflower is a really healthy vegetable that is easy to digest; it is rich in vitamin C and minerals. It also contains important trace elements and colourful varieties also contain high levels of beta-carotene or anthocyanins.

Before you can preserve cauliflower, it is important to protect your harvest from pests. The cabbage white butterfly (Piridae) and its hungry caterpillars are a particularly common cause of damage to cauliflowers. Learn all about this butterfly species and find tips on how to stop it devouring your brassicas. 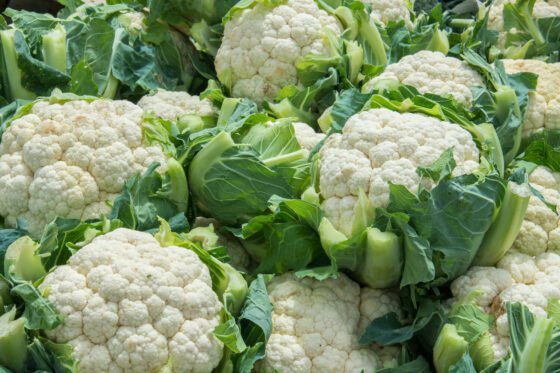 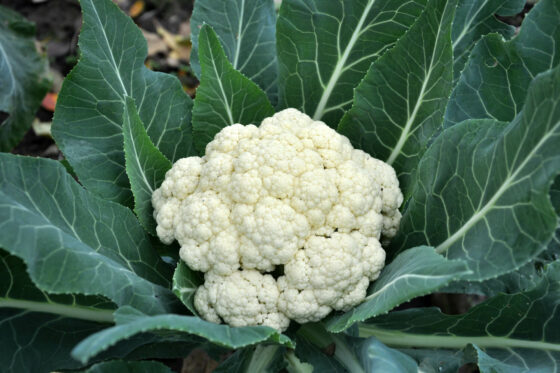 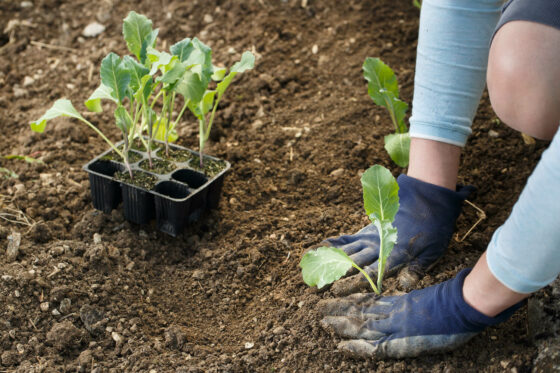 Growing cauliflower: where, how & the best companion plants