The witch hazel is one of the most early flowering shrubs in the garden. Here you can find out everything you need to know about witch hazel.

In autumn, the colourful foliage of the deciduous woody plant can be seen shining in yellow, orange and red from afar, and even in winter, the witch hazel (Hamamelis) conjures colourful flowers in the garden. Outside the flowering season, the witch hazel resembles the hazel (Corylus avellana) in terms of growth. But that is where the similarities end. Witch hazel (unlike hazel) belongs to the witch hazel family (Hamamelidaceae). This family can be traced back to the Cretaceous period 100 million years ago, making it one of the oldest angiospermous plants on earth. Despite this long history, the witch hazel is still quite rarely encountered in our gardens, yet the queen of winter bloomers is a real eye-catcher, which in the right location does not require much care and serves bees and bumblebees as one of the first sources of food.

There are a total of only five different species of witch hazel in the world, all of which are at home in the temperate regions of the Northern Hemisphere. Among them, three species originate from eastern North America and two species call eastern regions of Asia home. There were probably also species native to Europe, but they probably became extinct during the last ice age. Among extant species, those whose spatial separation is also greatest differ the most – especially in terms of flowering phase length and flower size. Here is a brief overview of the five species of witch hazel:

Virginian witch hazel or autumn-flowering witch hazel (Hamamelis virginiana): This species is an economically used medicinal plant whose active ingredients have haemostatic, anti-inflammatory, and antipruritic effects. This species is the only one to show its delicate yellow flowers in autumn. As a result, the flowers are still partially covered by foliage.

Ozark witch hazel (Hamamelis vernalis): The flowering period is between January and February. The species has short and orange-yellow petals. The leaves are glabrous except at the midrib.

Big-leaf witch hazel (Hamamelis ovalis): This is the youngest Hamamelis species. It was discovered only in 2006. It blooms from December to January in colours ranging from yellow, orange to red and even pink.

Japanese witch hazel (Hamamelis japonica): Blooming occurs between January and February; flowers are a vivid yellow. The species is more sensitive to frost than the others and curls its petals at low temperatures. Its autumn leaves are bright red.

But it is not only the species that differ. A wide range of varieties gives you a choice of flowers in colours ranging from green, yellow, orange to red, weakly to intensely fragrant. The same colour variation is found in the intensely coloured autumn foliage of witch hazel varieties.

The two Asian varieties are particularly popular as ornamental plants. They have particularly large flowers that appear from December to March. No wonder there are now hybrids (Hamamelis × intermedia) of the two species. The hybrids have the advantage that in them the alternate bearing of the Chinese witch hazel has been bred away. This means that every year they bloom to the same extent. Normally, flowering years are always followed by years with a leaner flower yield. As a result of these advantages, most commercially available varieties belong to the Hamamelis × intermedia. Here are a few beautiful and diverse varieties of witch hazel:

‘Diane’: Intense red flowers that turn brown-red toward the base; flowering does not begin until February; autumn foliage orange-yellow to scarlet; small-growing.

Planting witch hazel in the garden

The choice of location should be carefully considered when planting, because a witch hazel takes years to root really well and grow properly. It is especially important here to take into account the nature of the soil. Because when it comes to soil, the otherwise so frugal shrubs are rather demanding: they are sensitive to drought, compaction and waterlogging. The soil should have the following properties:

Witch hazel prefers a sunny to semi-shady location, preferably sheltered. Although the elegant shrub is hardy, if the weather conditions in winter are too harsh, the flowering suffers. Stormy easterly winds also because problems for the plants. A sheltered location, on the other hand, will ensure continued flowering. The slow-growing shrubs need two to three years to get used to their new location and root well. After that, the plant sprouts vigorously and does not tolerate transplanting well. Therefore, you should take time choosing where your witch hazel should spend its existence. After all, even if a transplant is well prepared for, the next flowering will be sparse. But it is not only their reluctance to be moved that you should take note of. These plants, which have little competition, prefer to be planted alone. Therefore, they are wonderful as specimen plants. When planting in groups, it is important to keep enough distance, because the crowns can grow four to five metres wide. Groups of varieties with different foliage shades look particularly beautiful. If you want to socialise your witch hazel despite its low-competition root system, here are the right planting partners and other tips for successful planting of witch hazel.

Tip: To improve the soil for witch hazel and promote the build-up of humus, you can use a so-called soil activator.

Witch hazel is planted in the autumn before the first frost. If you have purchased container plants, these can also be planted in spring. Handling container plants is generally somewhat easier than handling bare-root shrubs. However, with the following instructions, even the bare-root specimens will not because you any problems. The first two points do not apply when planting container specimens:

It is recommended to cut back the plant a little after planting.

Witch hazel in itself does not need to be cut back at all. Most often they form a beautiful and regular crown all by themselves. If pruned back severely, the plants can even die, because the slow-growing plants only sprout again very poorly from old wood. Their wound healing also leaves much to be desired. Minimal topiary can still be carried out. Plants are also happy to spare a branch for the vase. However, there is not much more to it.

The right time to prune

If pruning is required, the best time is spring after flowering. After growth stops in winter, the plant has the most energy. This can then be put into wound healing and new growth.

The procedure for cutting witch hazel

With witch hazels, you should really pace yourself when pruning, because the plants are not particularly fond of being pruned. If you still wish to prune them, then please use especially sharp and clean secateurs. This minimises the poorly healing wounds. It is also best to stay away from fully mature, thicker branches and limit yourself to young, thin shoots. The following applies to the pruning of a witch hazel:

Keep in mind that even a well-designed pruning will result in a meagre flower yield the following year. More information for the ideal pruning of your witch hazel, can be found here.

If you have taken into account all the important things when planting, witch hazel are extremely undemanding winter bloomers. They need to be watered only during prolonged drought. Make sure that there is no waterlogging and that the soil dries out completely. A layer of bark mulch covering the root zone protects against drying out. This mulch layer is removed and replaced every year in the course of fertilisation. Annual fertilisation is carried out in the spring and is especially necessary in sandy soil. Simply proceed as follows:

In late summer or early fall, you should once again provide your witch hazel with a nutrient fertiliser. Use a plant-based fertiliser such as our Plantura All Purpose Plant Food. This sustainably promotes soil life, thereby ensuring the good soil quality so urgently needed by the witch hazel. 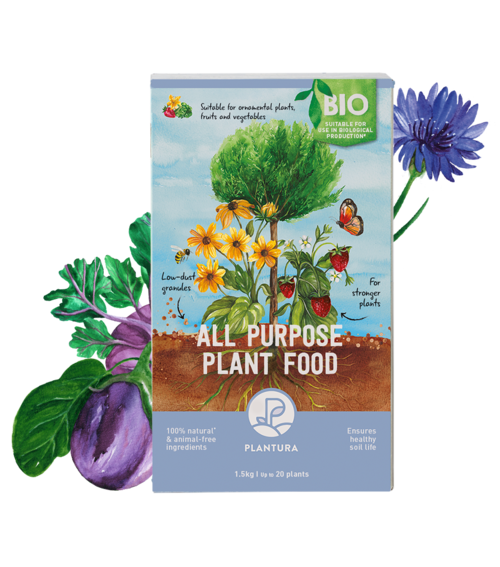 Use potassium magnesia (patent potash) in addition, so the plant will shed all its leaves in time before flowering. This way you have an unobstructed view of the blossoms. This becomes especially necessary with varieties such as ‘Sunburst’ and ‘Brevipetala’, some of which do not shed their foliage until spring. If your witch hazel feels neglected, it will let you know by a puny growth and meagre to absent flowering. Lack of flowering in this case may be due to the following reasons:

Heavy frost can delay flowering for several weeks into February. Young witch hazel can be covered with fleece to protect the crown from heavy frost in winter. This is how you protect the flowers. The shoots are extremely hardy and do not need protection. 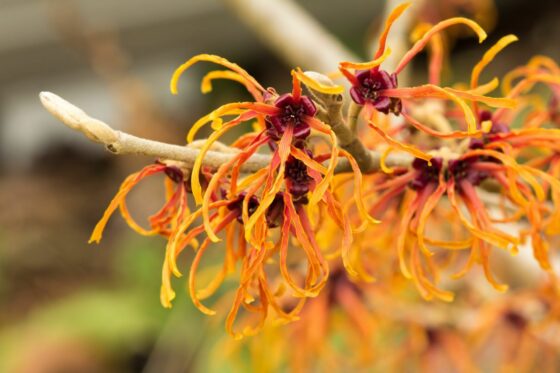 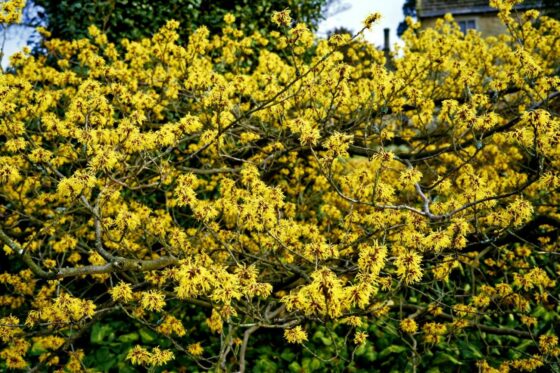