With the right location and care, wintersweet blooms bright yellow as early as December, bringing a pleasant, sweet vanilla scent.

Wintersweet (Chimonanthus praecox) is relatively unknown, but as an easy-care shrub that provides joy in winter with its bright fragrant flowers, it deserves a spot in every garden. Moreover, wintersweet flowers attract pollinators, offering a valuable source of food for bees at a time of year when flowers are scarce. In this article we explain everything you need to know about cultivation, location and care of wintersweet.

Although it also goes by the name Japanese allspice, wintersweet actually originates from China, where it grows at an altitude of up to 3000 metres. That said, it has been cultivated in Europe for several hundred years. Here, wintersweet is a perennial shrub that is mostly hardy. It reaches heights of 250 to 300 cm and can tolerate temperatures as low as -17 °C. It grows multi-stemmed, bushy and fan-shaped, so it can take up a lot of space. The foliage is green in summer, turns yellow in autumn and is shed shortly before flowering begins.

The special nature of this plant is reflected both in its English name and its botanical name. This is derived from the ancient Greek − “chimon” meaning winter and “anthos” meaning flower. The species name “praecox” refers to its very early flowering. When chimonanthus praecox flowers in winter, the shrub is pollinated by insects that are happy to receive any food in winter months. This makes it an important bee-friendly shrub. The flowers usually appear around December, are about 2.5 cm in size, yellow and have a pleasant fragrance. The long flowering period can extend right into March. In spring and after flowering, fruit capsules appear. They contain coffee bean-shaped seeds that are up to 1.5 cm long. However, these seeds only fully ripen in years of warm weather.

The most beautiful varieties

The entire family of the sweetshrubs or spicebushes (Calycanthaceae) contains just ten known species. This includes the small handful of wintersweet varieties. Nevertheless, we would like to introduce you to two of them that are commonly found in garden centres.

The ideal location for wintersweet is in a sunny spot sheltered from the wind. The soil should be deep, well-draining and nutrient-rich. As far as the pH value is concerned, the plants are surprisingly tolerant and adaptable, but prefer neutral to chalky soils. If you buy young plants, transplant them into their final location from spring to autumn, with spring being considered the optimal planting time. This gives the young shrubs enough time to take root before the next winter and flowering season.

How to plant wintersweet in the garden: 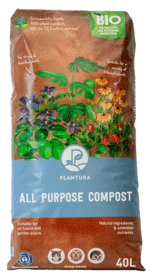 Tip: You can also grow a Japanese allspice plant in a pot. For a young plant of about 20 to 30 cm in height, the pot should have a diameter and a depth of about 40 cm. Keep in mind, the pot must grow with the plant and be enlarged regularly. Our Plantura Organic All Purpose Compost, for example, is suitable as a potting soil for wintersweet. It has already been pre-fertilised and provides optimal care for the young wintersweet plants in the early stages. As it is also peat-free, its production emits almost 60 % less CO2 than conventional potting soils.

Wintersweet tolerates occasional short periods of dryness, but is much happier in moist soil. That said, it is important to keep in mind that the shrub does not tolerate waterlogging at all. During longer dry periods, make sure to water young plants in particular occasionally but generously.

Regular care of the wintersweet shrub includes fertilising, especially in late spring and summer. For this, work our slow-release Plantura All Purpose Plant Food or mature compost into the soil around the plant at the beginning of growth in spring and a second time in summer. In addition to having a nutrient balance that is perfect for many types of plants, our universal fertiliser is also vegan and has a high amount of organic matter to support healthy soil life. 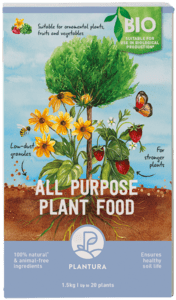 Many people find that wintersweet spreads widely and becomes too large over time. So, how and when should you prune it? Chimonanthus praecox flowers on branches in their second year of growth. This means that the buds for the following flowering season are already set in the previous year. Therefore, pruning should be done in late winter or spring straight after the end of the flowering period. To encourage more branching, you can also shorten individual shoots. If the shrub is generally too dense and large, you can also remove parts of it completely. The wintersweet shrub often still produces flowers on its perennial wood, so radical pruning for rejuvenation is not necessary.

During their first few winters, the plants still need protection from frost. Use a mulch layer of pine bark, straw or leaves for this. Older plants are hardier, but they too can only tolerate temperatures of -15 to -17 °C. Potted plants are especially vulnerable − so overwinter them every year, wrapped in a protective garden fleece or jute sack.

Wintersweet can be propagated by seeds or layering, whereby the layering method is considered to be the easiest and most successful. In spring, gently bend a shoot growing close to the ground until it touches the soil. It is okay if the bark on the underside, where it touches the ground, cracks − this actually stimulates root formation at that spot. Without removing the shoot from the mother plant, use a stone, peg or soil pin to fix the shoot to the ground. Then remove some leaves in the middle area and cover this part with soil. In the following summer and autumn, make sure to always keep the shoot moist. Once the first roots have formed, you can separate the new plant from the mother plant in autumn and pot it. The following spring at the latest, it should be possible to transplant it into its new, permanent location.

Yes, wintersweet is poisonous. Chimonanthus praecox leaves contain poisonous alkaloids, including calycanthine (a central nervous system toxin), which is why they must not be eaten under any circumstances. This alkaloid is also found in the seeds, making the fruits of Chimonanthus praecox toxic too. Likewise take care with pets, as calycanthine can cause them severe poisoning as well. Despite its toxicity, wintersweet has long been used in Chinese folk medicine and aromas for the lovely fragrance extracted from its flowers.

If you are looking for more plants to chase away the winter gloom with their colourful blossoms, check out our list of the most beautiful winter-flowering plants.