Dogwoods are popular shrubs and small trees and, as long as they get enough water, grow well almost anywhere. Discover some of the most beautiful Cornus varieties and species.

In our part of the world, dogwoods (Cornus) are one of the most widespread wild shrubs, but numerous ornamental species have now also found their way into our gardens. Discover some of the most beautiful dogwood species and varieties below.

How many dogwood varieties and species are there?

The dogwood genus comprises about 50 to 60 species. These are distributed mainly in the temperate zone of the Northern Hemisphere. Generally speaking, these hardy deciduous shrubs or small trees are not too fussy when it comes to location. They grow vigorously and tolerate pruning well, which is why some species are popular in flowering bird hedges. Dogwood flowers are small and umbellate together or surrounded by large, white or coloured bracts. The white, black or red fruits are often edible and many dogwood species display bright colours in autumn and winter.

Some of the most beautiful dogwood species and varieties

It is possible to plant dogwoods in a variety of ways in gardens – either as ornamentals or edible wild fruit. Whether as a ground cover, shrub or small tree, there are numerous Cornus varieties and species to choose from.

Pacific dogwood, also known as western or mountain dogwood, is native to western North America. This tall, upright-growing shrub is common there as undergrowth in coniferous forests. In our part of the world, Cornus nuttallii grows around 3 to 6 m tall, and even up to 15 m in its native habitat. It prefers fresh to moist, but well-draining and humus-rich soils with an acidic to neutral pH. In autumn, the elliptical leaves, which sit opposite on the stem, turn bright yellow to orange-red in colour. Anywhere from four to eight (usually six) pink-white hairy bracts surround the very small flowers, making the flower appear 10 cm or larger. Orange-red fruits, about 1 cm long, ripen from October. ‘Eddie’s White Wonder’, a vigorous and frost-hardy variety, can grow 4 to 6 m tall and up to 5 m wide. Four to five creamy white to green-white bracts surround the numerous flowers that appear in May.

Flowering dogwood is native to the forests of North America and is one of the wide-spreading, but slow-growing, large dogwood varieties. This American dogwood reaches around 4 to 6 m tall and wide. The large, oval, pointed leaves sit opposite the green-purple shoots. In autumn, the foliage of the flowering dogwood turns a stunning scarlet-purple. Between May and June, this variety of dogwood produces large numbers of white-framed flowers up to 9 cm in size. Cornus florida ‘Rubra’ forms unusual pink bracts in May. The scarlet, egg-shaped fruits appear between late summer and autumn. Flowering Dogwood prefers fresh, slightly acidic to neutral, humus-rich and well-draining soil and likes to be somewhere in sun to partial shade.

Common dogwood, also known as bloody dogwood, is widespread and great for providing food for birds. It is native throughout the Continent and in Asia and North America. This very low-maintenance, vigorous growing and robust dogwood species thrives along woodland edges. It prefers calcareous to slightly acidic, moist to dry soils in sun to partial shade. Common dogwood grows to an average height of 4 m and broadens out with age. The leaves, which turn bright wine-red to orange in the autumn, sit opposite each other on blood-red shoots. The dogwood variety ‘Winter Beauty’ has similarly striking orange-yellow shoots. Between May and June, white, slightly fragrant flowers appear in umbels. These form black, spherical fruits that are slightly poisonous when raw, but can be used in herbal medicine or even to make jam or juice.

Red osier dogwood has light green to bright yellow shoots that are particularly stunning in winter after the leaves fall in autumn. Native to North America, these multi-shoot shrubs prefer fresh to moist locations and tolerate almost any soil from acidic to alkaline pH. Red osier dogwood can grow 1.5 to 3 m tall and just as wide when more mature. The deciduous leaves sit opposite on the stem and are oval to lancet in shape and light green in colour. In May, the yellow-white flowers appear in large umbrella panicles and attract numerous insects. This dogwood produces white, round fruits with a diameter of 7 to 9 mm, which remain on the bush until winter. Red osier dogwood is winter hardy, can spread vigorously and can even survive flooding. The Cornus varieties ‘Flaviramea’ and ‘Kelseyi’ are the best known of this species. While ‘Flaviramea’ stands out with its bright yellow shoots, ‘Kelseyi’ is a dwarf dogwood that reaches a mere 0.75 m in height, making it an ideal low hedge plant.

Japanese cornelian cherry, also known as Japanese cornel, is a dogwood that can grow into an impressive tree measuring 4 to 7 m in height. This fruit tree native to China, Japan and Korea grows very fast, especially when young. Japanese cornel is does well in fresh to moist, well-draining soils in sunny to semi-shady spots. Between March and April, Japanese cornelian cherry attracts numerous bees and other pollinators to its bright yellow flowers that sit on branches which, at this point, are still bare. On top of being decorative, the red stone fruits that ripen from August make great food for birds and small mammals and are also suitable for making into wild fruit jams or compotes. The fruits, unlike Cornus mas, do not always fall off, but can remain on the tree hanging throughout the winter. In the autumn, this Asian dogwood displays red-brown autumn colour on its relatively narrow, grey-brown branches.

Japanese dogwood, also known as kousa, kousa dogwood, Chinese dogwood or Korean dogwood, is originally native to the mountainous forest regions of Japan and Korea. Chinese dogwood (Cornus kousa var. chinensis) ages more slowly, which is why numerous cultivars are assigned to this variant of the species. Shrubs up to 6 m high and 4.5 m wide can now be found in many gardens thanks to their shapely growth. The elliptical tapered leaves are dull blue-green in colour on the underside and turn yellow to scarlet in the autumn. From late May to June, greenish yellow flowers appear with four green-white to pink bracts encircling them. Little known in our parts of the world, however, is its use as a tasty wild fruit. Japanese dogwood fruits, which have long stems and are similar to raspberries in shape, are also known as mountain lychees and are a popular fruit in East Asian countries. Mountain lychees are eaten raw or processed, enjoying only the creamy, yellow-orange flesh, not the rough pink skin.

Cornelian cherry, sometimes known as European cornel or Cornelian cherry dogwood, is a wild fruit tree that is now once again widespread. It grows as a large shrub or small tree of 6 – 8 m in height. Unlike Japanese Cornelian Cherry, Cornus mas forms much larger fruits that fall from the tree once fully ripe. The yellow flowers form round umbels and appear between February and April on shoots still bare from winter. From August to September, the 2 to 3 cm large, predominantly deep red fruits ripen. In some dogwood varieties these fruits are yellow. The raw edible but sour flesh makes a great jam or purée with an extraordinary fruity taste. This dogwood species was selected with a focus on yield, fruit size and flavour. Popular varieties are, for instance, ‘Jolico’, ‘Kasanlak’ as well as ‘Yellow’.

Cornus controversa is also known as the wedding cake tree due to its side shoots which grow horizontally and in tiers, as well as its white flowers. This Cornus species is originally from Korea and Japan. The tall shrub or small tree reaches a growth height of 5 to 8 m and can grow just as wide. The alternate leaves are round and taper to a point, but can vary greatly in shape and size. The umbrella panicles, up to 15 cm in size, appear in June, each forming hundreds of small white flowers. After pollination, numerous, black-blue, thick and round fruits appear. Cornus controversa prefers fresh to moist soils with good drainage and an acidic to neutral pH. The variegated dogwood varieties ‘Variegata’ and ‘Pagoda’ are notable for how they spread.

Dwarf cornel, also known as bunchberry, is found in subpolar regions and grows in graceful carpets on acidic, humus forest soils in shade to partial shade. This dogwood species is sensitive when it comes to location. It grows about 10 cm tall with oval-round leave that grow opposite on the shoots. Between July and August, it produces delicate white bracts with a blue-grey centre. From September onwards, dwarf cornel bears edible (but rather bland) red fruits, the seeds of which are dispersed by animals.

Creeping dogwood grows throughout North America, Greenland and Japan. This creeping, root-stalking perennial reaches a growth height of 10 to 20 cm. It is suitable as groundcover dogwoods for moist, weakly acidic to neutral forest soils in partial shade. During milder winters, creeping dogwood is an evergreen with a slight orange-red tinge to the rather small, oval-pointed leaves. Creeping dogwood blooms in June. The flowers are surrounded by white bracts. The fruits are bright red in colour and resemble dwarf dogwood.

Alternate-leaf dogwood, also known as pagoda dogwood, is native to North America. There it is found in the undergrowth as well as along the edge of waterways and in wetlands. This is a dogwood variety which prefers sunny to partial shade spots and acidic to neutral, humus-rich, fresh to moist soil with good drainage. The upright shrub grows from 3 to 6 m tall and between 2 to 5 m wide. The growth habit is reminiscent of the Cornus controversa, as the spreading side branches protrude in tiers. Unlike many other Cornus varieties or species, the broad oval leaves sit alternately on the purple-brown to grey shoots. The flowers form clusters in broad umbrella-like panicles and bloom between May and June. In the autumn, this variety bears blue-black fruits which grow on red stems. These again provide food for birds in the dreary winter months.

White dogwood, also known as Siberian dogood or red-barked dogwood, originates from a wide area from Eastern Europe through Siberia to North Korea. This large shrub reaches a growth height of 3 to 4 m and usually becomes wider than it is tall when fully mature. The bark on its young shoots is blood red and darkens to a black-brown colour over time. The green-blue, egg-shaped leaves turn a yellow to orange-red colour in autumn. Between May and June, yellow-white flowers open in umbels. After pollination, these mature into pea-sized, white-blue fruits. White dogwood has no special soil requirements and is tolerant of lime. However, it does like moisture and will sometimes spread vigorously given a moist environment.

The strawberry tree (Arbutus) forms round, red and edible fruits similar to those of dogwood trees. See our article for tips on how to cultivate this rarity in your own garden. 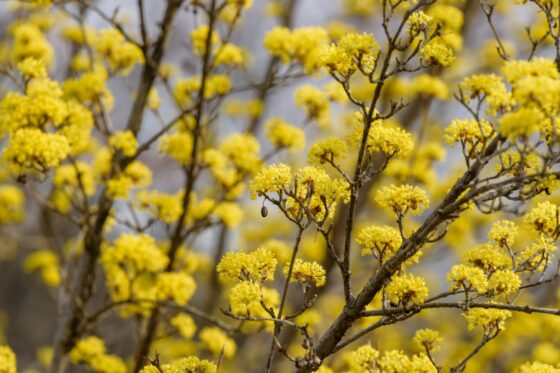