Today, almost every kitchen has a pot of chives. Discover all you need to know about this classic culinary herb, including our tips on harvesting, overwintering and propagation in this article.

Chives (Allium schoenoprasum) are one of the UK’s most popular kitchen herbs. Here is our guide to cultivating an abundant chive harvest, storing chive leaves, and propagation. To learn more about taking care of your chive plant, read our article on chive care.

Chives (Allium schoenoprasum) are, as their Latin name suggests, closely related to leeks (Allium). They belong to the Amaryllis family (Amaryllidaceae), and are a hugely popular culinary herb. No surprise! From decorative garnishes in hearty soups and stews, to fresh flavours in sandwiches, chives have plenty of uses. Even their flowers are edible, and can add a splash of colour and delicate onion flavour to salads.

Where exactly the herb comes from and when humans started cultivating it is not known. In the UK, chives have a long history and have been cultivated for millennia. While in China, the herb is said to have been planted as early as 3000 BC.

Chives are particularly hardy. In the wild, they are sometimes found in subarctic zones, in the high mountains of the northern hemisphere, in flood plains, on lakeshores and in marshland.

The herbaceous, perennial chive can reach up to 50cm, and grows out of thin, egg-shaped to cylindrical bulbs. One to two green, hollow, tube-like leaves form on each chive bulb. The herb reproduces through daughter bulbs, which is why they often appear naturally as a densely leaved clump.

The violet-purple, sometimes white or slightly blue flowers appear between May and August. A chive’s flower stem is similar in shape and colour to its leaves. However, it grows taller and sturdier, and produces a crescent-shaped flower head at the end, with a diameter of up to 8cm. Each flower head is covered in about 30 to 50 individual flowers.

Depending on the variety, chives differ in appearance and taste. Read more about their characteristics in our article on chive varieties.

Chives flowering: what to do?

When the beautiful chive blossoms appear between May and August, you may ask yourself: what should I do with the flowers? Thankfully, chive blossoms are edible and full of nectar, which gives them an intensely aromatic, slightly sweet flavour. The flower stem, on the other hand, is tougher and almost tasteless because of its thick growth.

Chive flower nectar attracts many insects, including butterflies, honey bees and bumblebees. As such, chives make a wonderful bee-friendly and insect-friendly addition to the garden.

As a herbaceous plant, chives dry out in autumn and sprout again from their bulbs in spring. The plant is not evergreen, but winter-hardy due to its frost-tolerant bulbs, which serve as a survival organ for the plant. A chive bulb usually tolerates temperatures as low as -25°C without any problems. As a precaution, however, you can apply a protective layer of mulch or twigs and branches around the base of the plant.

If your chives are potted, overwinter them in a cool, frost-free location. Because they are temperate, chives need to cool once a year in winter – just as humans need daily sleep. If chives are not allowed a rest period in winter, they lose their health and vigour. To harvest chives in winter, use the “chive forcing” method:

Growing chives from seed is relatively simple and promises a high success rate. Besides the classic sowing method, there are other ways to propagate this garden herb. Read on to find out more!

If you do not cut your chives, they will flower. It is from these flowers that you will be able to harvest your own chive seeds, and use them for sowing new plants in spring. Chive seeds usually form in the second week of flowering, after the purple flowers have been pollinated by insects like the bumblebee and honey bee. The seeds are located on the seed stalks of the flowers, and should be easy to remove. Simply push them off with your thumb and forefinger.

Dry your seeds on kitchen paper and store them in a dark, dry location. This prevents premature germination. Like this, your seeds should keep for up to twelve months. You can find out how to plant chive seeds in our article on planting chives.

Instead of propagating your chives from seed, you can divide the plant. Do this every three years or so, preferably in April, by removing your plant from its soil and divide it into two parts. Be sure to keep the chive roots intact, and then replant each part, watering well. Each chive plant should take root by itself.

Harvesting chives: when and how

Chives from the windowsill can be harvested and eaten throughout the year, whereas chives from the garden can be harvested between spring and autumn. In both instances, it is important not to harvest too much, otherwise you may harm the plant. If you need lots of chives, cultivate many plants, instead of damaging a single plant through over-harvesting.

To harvest chives, cut each leaf as close to the ground as possible using a sharp knife or scissors. The chives can be eaten fresh and raw, or used as seasoning when cooking.

How to store chives

Chives are best harvested fresh, as and when you need them. If you want to stock up for the winter months, cut back the plant in early autumn. Chives can be kept in the fridge for about a week if moist. Here are some other options for storing chives for a longer period of time.

Can you freeze chives?

Yes, freezing chives is the most common storage method. To do this, wash the chives and dry them well. Then cut the stalks into small pieces, place in a freezer bag or tin, and freeze; they will keep for months, and not lose any of their delicious flavour!

Can you dry chives?

In principle, it is possible to dry chives for storage. However, dried chives lose a lot of their flavour and change consistency. Dried chives look more like straw than a fresh herb.

Chives are considered medicinal. They are packed with vitamin C and beneficial sulphur-like compounds, as well as essential oils. To benefit from these vitamins and oils, chives are best eaten raw. They are particularly popular in sour cream, herb butter, herb cheese, and herb dips. The herb also looks great in pancakes, potato soup and potato salads.

Chives are easy to care for and, because of their mustard oils, unaffected by most pests. Occasionally, chives do suffer from the rust fungus Puccinia allii, which is protected against most common fungicides. In most cases, the only way to contain a fungus infestation is to cut large areas of the affected plants. A few weeks later, the plant will sprout healthy new shoots from the bulbs.

Note: Do not dispose of plants with fungal infestation in your compost but in your general waste bin.

Are chives poisonous to dogs and cats?

Chives can be particularly dangerous for cats, as they are easily mistaken for cat grass and nibbled on. If eaten by cats or dogs, even relatively small amounts can cause symptoms of poisoning: trembling, unsteadiness, diarrhoea and vomiting. In larger quantities, chives can irritate an animal’s stomach lining, damage haemoglobin in the blood, and harm bone marrow. In severe cases, recovery is slow. A dose of about 15 to 30g per kg body weight can even be fatal. It is unlikely that your pet will ingest such large amounts of chives. Nevertheless, keep an eye on your animals if you are growing chives at home.

Want to start a herb garden for your kitchen? Then read our article on planting and care tips for herbs in pots. 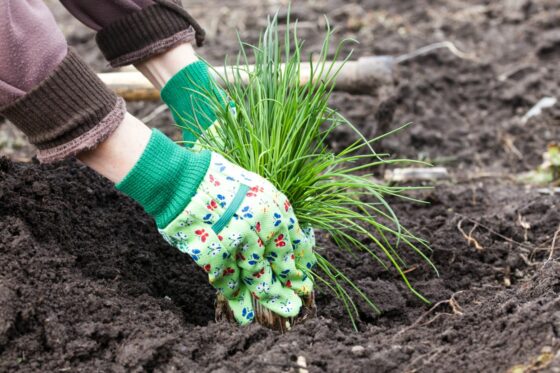 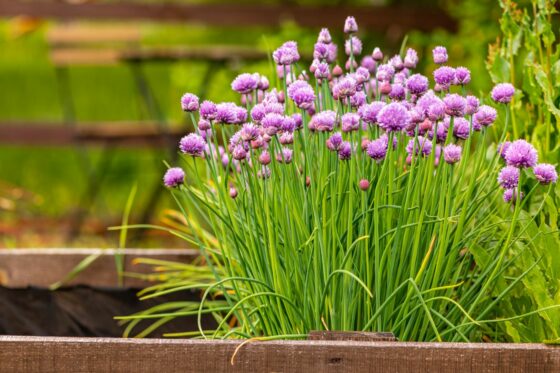