The healing properties of chamomile have been known for centuries. But what makes chamomile so good for our health, and what can you use it for?

Chamomile (Matricaria) is widely cultivated by people as a medicinal plant. Healers have known and utilised the benefits of chamomile for thousands of years. Anglo-Saxons believed it to be one of just nine sacred herbs given to humans from God. Germanic tribes and Egyptians revered the flower as a sacred plant of their sun deities. Still today, many people swear by its beneficial powers. Chamomile can be used to help treat many different ailments, such as inflammations, stomach aches and colds.

What makes chamomile so healthy?

German chamomile (Matricaria chamomilla) contains the most active medicinal substances, but Roman chamomile (Chamaemelum nobile) can also be used as a medicinal plant. However, bear in mind that mayweed (Anthemis), which closely resembles chamomile, is considered slightly poisonous and should not be used in medicine or cooking. Other chamomile species are not poisonous, but also do not have any significant levels of active substances. They are therefore rarely used for anything other than as an ornamental flower.

The ingredients of chamomile also have an antibacterial effect, can help prevent the effects of inflammatory substances and can relax cramped muscles. Because of these properties, chamomile is used to treat a wide range of illnesses from colds to skin problems.

Can you eat chamomile?

The flowers, buds and leaves of chamomile are all edible and can be used in the kitchen. The roots and stems, on the other hand, are not typically used. Animals too can eat and enjoy the chamomile’s health benefits. Chamomile tea can be calming for dogs and help against gastrointestinal issues. Roman chamomile is also suitable for human consumption. It smells and tastes subtly of apples. Keep in mind, some species closely related to and closely resembling chamomile such as mayweed (Anthemis), on the other hand, are considered slightly poisonous and should not be eaten. You should also keep pets, such as dogs and cats away from mayweed, but occasional nibbling is harmless. Horses and rabbits too can tolerate small amounts of mayweed.

Fortunately, chamomile is one of the few medicinal plants that can be used by the average person with virtually no side effects. It hardly ever causes any negative effects even when prepared or dosed incorrectly. Nevertheless, there are a few things to consider when using German chamomile as a remedy. People allergic to the daisy family (Asteraceae) should refrain from using chamomile as a home remedy. These people can suffer severe allergic reactions if there are contaminants from other daisy species such as mayweed. Confusion between German chamomile and mayweed is not uncommon. To find out more, read our article on the differences between varieties and the risk of confusion with chamomile. In addition, you should refrain from using homemade chamomile remedies in or around the eyes − they may have contaminants and cause eye infections.

German chamomile is a medicine cabinet staple because of how easy it is to use and its versatility. People can use it to make their own, homemade remedies − no professionals needed. Roman chamomile, with similar ingredients, can also be used in home remedies. Chamomile is also suitable for children. Appropriate doses of chamomile tea, for example, can be used for babies without a second thought.

Many people are familiar with chamomile flower tea. Whether an upset stomach or the flu – this warm drink can help with a wide range of illnesses. But is it an old wives’ tale, or is chamomile tea actually good for you? As a matter of fact, the healing oils from chamomile dissolved in hot water can provide relief from minor ailments. Chamomile tea has a calming effect, relieves gastrointestinal cramps and can also be beneficial to those suffering from gastritis. Chamomile also helps against inflammation in the mouth and throat − used several times a day, mouthwash with chamomile has an anti-inflammatory and pain-relieving effect. In Southern Europe, this healthy tea is also widely used as a sleeping aid and sedative. It is even said to have an antispasmodic effect on menstrual cramps.

Tip: You can also use chamomile tea for hair care. It soothes the scalp and slightly lightens hair.

As a household remedy, chamomile tea is not only healthy, but also extremely popular. Is it any wonder though? After all, it is easy to make. To make a chamomile tea infusion, you can use either fresh or dried flowers. The best time to harvest chamomile is when the flower is fully open, before it fades. Infuse two to three teaspoons of dried chamomile flowers in a cup of hot, but no longer boiling, water. After the tea has steeped for about ten minutes, strain out the flowers, and enjoy. A daily dose of German chamomile is around 9 to 12 grams of the dried blossoms.

Chamomile is probably best known for its soothing effect against respiratory issues and colds. In such cases, chamomile tea is not the answer. If you have a severe cold, it is time to sweat it out. The active ingredients of chamomile reach the lungs through inhalation. Inhaling the steam of a hot chamomile steamer can be unpleasant for some, but it provides relief to cold symptoms affecting your airways. To prepare a chamomile steamer, add two handfuls of chamomile flowers to a bowl of boiling hot water. Hang your head over the pot and a towel over your head (to contain the steam), and breathe deeply, in and out, for 10 to 20 minutes. This process is not pleasant, but it works wonders. The steam moisturises the dry and irritated mucous membranes, and the essential oils from the chamomile soothe the inflammation.

Although most commonly used in tea, chamomile has also proven itself to be an effective external remedy for skin. Chamomile cream is beneficial for skin − it helps heal wounds and provides an antibacterial effect. A chamomile oil-based ointment can be applied, for example, to skin inflammations, mucous membrane inflammations or bacterial skin conditions. Chamomile ointment can also help treat mouth infections.

Ointments and creams are not the only external treatment − adding chamomile to a bath or sitz bath can also have a healing effect. German chamomile can help with skin conditions such as neurodermatitis or mild sunburn, whereby its anti-inflammatory and antibacterial effects provide relief. To make a chamomile bath, infuse 50 to 100 g of chamomile flowers in one litre of hot water. After ten minutes, strain out the flowers, and then add the liquid to your bath water. Sitz baths, or hip baths, with chamomile also provide an anti-inflammatory effect for anal and genital conditions, such as haemorrhoids. When used in sitz baths, chamomile essential oils relieve discomfort and accelerate healing.

Chamomile oil is versatile and can be extracted from both German and Roman chamomile. Try adding chamomile oil to your bath water together with a spoonful of honey to enjoy its effects. You can also dip clean cloths in a bowl of water with a few drops of chamomile oil to make a compress. Apply the compress to areas with neurodermatitis or muscle tension.

Do you want to grow chamomile in your own garden? Here are some tips on how plant chamomile. 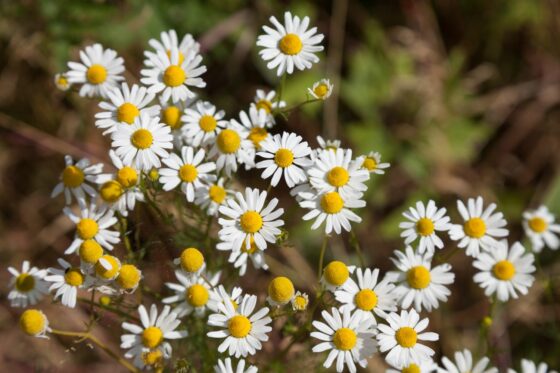 Types of chamomile: how to tell chamomile species & varieties apart 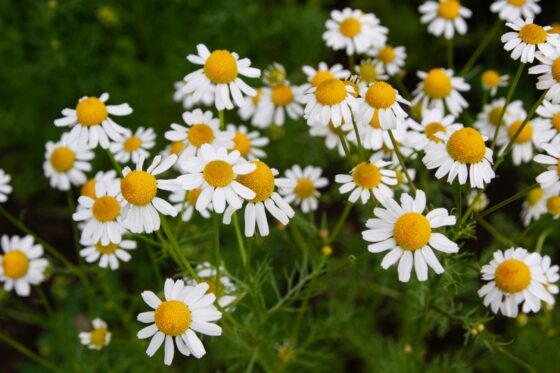 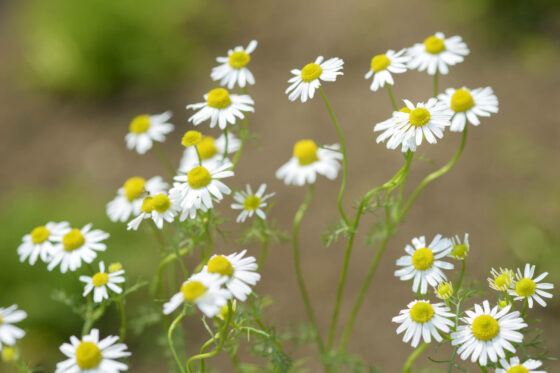 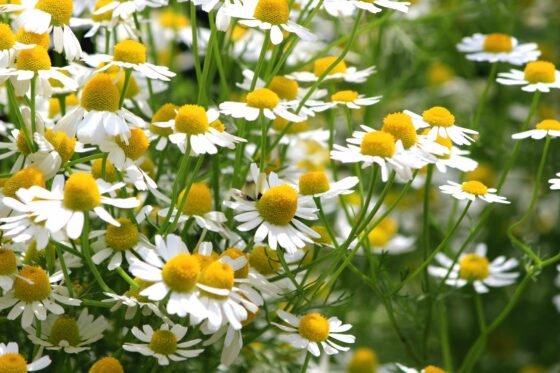