Borage has been cultivated as a herb and medicinal plant since as far back as the Middle Ages, and today it can still be found in many gardens. Read on to learn about how it grows, the different borage species and much more.

Borage (Borago) truly is a wonder herb − fragrant, tasty and with beautiful flowers that enrich your garden by attracting loads of pollinators. If you don’t have borage in your own garden yet, it is about time! Discover the plant’s origins and different varieties as well as how to harvest this aromatic culinary and medicinal herb.

Borage is a plant from the Boraginaceae family. Another name for the herb is starflower − thanks to its star-shaped flowers. Bear in mind, however, the name starflower can also refer to a few other types of flowers unrelated to the herb. Beekeepers value borage in bee pastures because it produces an abundance of sugar rich nectar.

Tip: Borage flowers initially bloom in pink. Later, their colour turns blue as the pH-value of the flowers changes.

Originally from Western Asia and the Mediterranean, borage has now conquered almost the entire world. It rarely naturalises as a “garden escapee” and is considered non-invasive. It can be found in Europe and North America, as well as in New Zealand, West Asia and South America. Even the ancient Greeks and Romans were familiar with the herb and used it in many different ways. Borage made its way to the rest of Europe in the late Middle Ages, where it was first cultivated in France. Today, it is hard to imagine our herb gardens without it.

The leaves and stems are covered with fine hairs called trichomes. The dark green leaves can grow to between 10 and 15 centimetres long and are lance-shaped. Borage plants flower between May and July in white or blue, depending on the variety. If the star-shaped flowers are pollinated, they develop into fruits called drupes, which is a typical borage family trait. Each drupe is made up of 4 nutlets − the seeds are contained within these nutlets.

Is it a perennial?

There are both annual and perennial Borago species. They are herbaceous plants that form broad clumps a and grow up to one metre tall. Even the short-lived annual borage plants form densely-branched, long roots that are brown on the outside and white on the inside.

Confusing borage with other plants

There are only five species in the Borago genus. The most common is, of course, common borage (Borago officinalis). But creeping borage and perennial borage are also interesting for hobby gardeners. Here is a short overview of some species and varieties.

Common borage is an annual and the best known of the species. This species forms blue flowers with a vivid hue and black stamens. Two varieties of common borage deserve a special mention:

Bell-flowered borage, also known as Borago laxiflora or pygmy borage, is ideal as a potted plant thanks to its dainty growth. Unlike Borago officinalis, Borago pygmaea is a perennial. This species originates from Sardinia and Corsica and is similar to common borage in both taste and use.

How to propagate borage

Borage can only be propagated by seed and is a self-seeder. This can sometimes be a nuisance if your plants start to spread and take over the garden. But there is no need to worry – you can simply pull out any unwanted plants.

For propagation, either leave your plants to sow themselves or collect the seeds and save them for next year. Wait until the flowers wither before harvesting the seeds. Just after the drupes start to turn brown, and before they fall to the ground, is the ideal time to pick the seed-bearing fruits. Remove the seeds from the nutlets and allow them to dry for a few days before storing.

Store borage seeds over winter in a cool and dry place. For spring sowing, we recommend a nutrient-poor soil such as our Plantura Organic Herb & Seedling Compost. This will help the young plants develop stronger roots. Our sowing compost is particularly suitable because it is a peat-free mixture with added perlite for better aeration. You can find out when to sow and where borage feels at home in our article on growing borage.

Tip: Borage forms a deep taproot. If starting the plant indoors, take special care not to damage this taproot when transplanting outdoors.

Both the leaves and flowers can be harvested for later use. Here are some ways to harvest, store and preserve both parts of the plant.

The green leaves can be harvested all year round. Pick only the young, tender leaves − the older ones are usually hairier and more acidic. For the best flavour, always use the greens fresh, soon after picking. In midsummer, try harvesting the leaves in the morning before the sun hits them. This is when the water content in the plants is still at its highest and they will keep longer. Fresh leaves can be stored in the fridge for a few days.

For preservation, you can dry the leaves or preserve them in vinegar or oil. However, drying borage is generally not recommended, as much of the herb’s aroma is lost in the process.

Borage flowers are also edible. We recommend picking the flowers in the morning, before they have a chance to wilt in the sun. Fresh flowers will only keep for a few days in the fridge. Candied in sugar, on the other hand, the beautiful starflower will last longer. You can also try freezing them with water in ice cube trays − these make beautiful garnishes to cocktails and other iced drinks. The flowers can also be preserved in vinegar and oil, but they will lose their vivid blue colour.

It should be noted that borage contains some plant substances which are not entirely harmless to humans.

The leaves have a cucumber-like taste and are a delicious ingredient in many recipes. They are great additions to salads as well as soups and can be prepared like kale or spinach. The refreshing taste is excellent in savoury vegetable dishes and cold drinks. The flowers can be used in the same way, but are particularly eye-catching in salads and on desserts. Borage oil for cooking is extracted from the seeds.

Borage flowers are not the only blossoms you can use to brighten up your food and drinks. Check out our top 20 edible flowers. 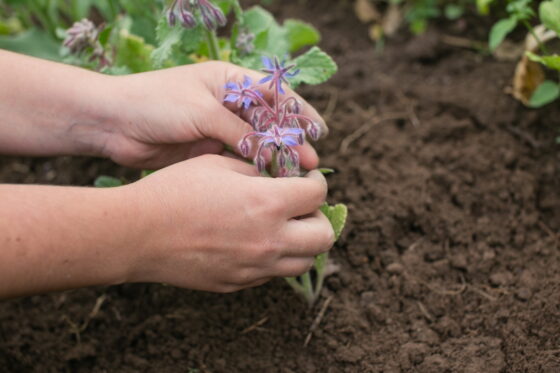