Ground cinnamon is a very popular spice, but did you know it can also support your garden plants?

It is likely that you have some cinnamon lying somewhere in your kitchen cupboards. This powdered spice is made from the dried bark of the cinnamon tree (Cinnamomum verum). The tree’s extremely thin bark either falls off by itself or is peeled off manually, before it is stacked, one on top of the other, and dried. After proper drying, the bark rolls up naturally into the cinnamon sticks that we all know and use for baking. The cinnamon sticks can then be ground into cinnamon powder – another staple of the kitchen. What you may not know is that cinnamon is used as a base for ecological plant protection and pest control. Here, we take a look at how exactly cinnamon acts as a natural deterrent against pests, such as ants.

Cinnamon is more than a Christmas spice! There are almost countless uses for cinnamon in the garden: it can be used as a nature-friendly pesticide, a repellent against annoying insects, or as a catalyst to promote root growth in plant cuttings.

Cinnamon for mould on plants

Scientific studies indicate that cinnamon works against fungal pathogens. Under laboratory conditions, scientists have shown that the elements in cinnamon powder inhibit the development of grey mould (Botrytis cinerea) and various species of Phytophthora. Spraying a mixture of ground cinnamon solution and water onto infected plants can be an effective way to alleviate the symptoms of fungal infestations.

How to use cinnamon against mould on plants:

Since cinnamon inhibits the development of fungal pathogens, it can also be used on seedlings, directly after germination. Cinnamon helps protect seedlings against rot, which ultimately accelerates growth. What is more, for seedlings, you do not need to prepare the cinnamon solution: simply sprinkle some ground cinnamon directly on the seedlings and the rest should take care of itself.

Ground cinnamon also deters mould on substrate surfaces, such as a garden bed. To protect your soil, it is sufficient to distribute the powder onto the substrate. Though do water the soil afterwards!

Cinnamon against ants and other pests

Sprinkling ground cinnamon onto your garden bed deters dark-winged fungus gnats (Sciaridae). What makes this method so effective is that the aromatic powder can break the gnats’ reproduction cycle. This way they cannot hatch or reproduce.

Cinnamon can also be used to fight ants (Formicidae). It has a repellent effect against various ant species, both as a powder or as an oil. Although it may not work for all ant species, it is worth a try! For best effects, remove all traces of the ant’s pheromones. A pungent cleaning product is ideal for this. Afterwards, spread the cinnamon powder or oil in 5cm wide lines. In fact, scattering some cinnamon at the entrance of an anthill may be enough to relocate the colony.

Cinnamon as a rooting agent and growth stimulant

Depending on the species, cinnamon can also be used to propagate cuttings. Apply a little ground cinnamon to the bottom of the cutting. This should accelerate the repair of the wound and stimulate root formation. In combination, these effects make cinnamon a great alternative to rooting hormones, which are, for various reasons, prohibited.

But be careful. Scientific studies indicate that cinnamon can inhibit the growth of certain plants, like tomatoes and garden cress. You should also be careful not to cause unintended negative effects on your plants while using cinnamon in the garden. 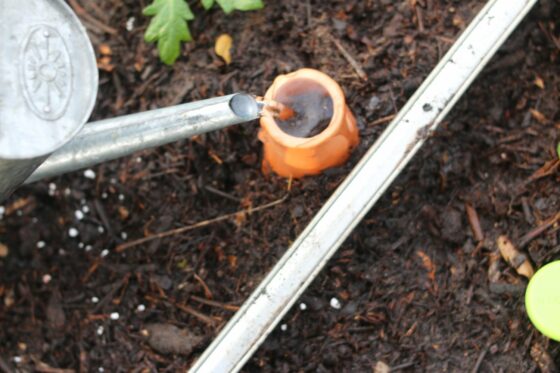