The first early spring flowers begin to bloom as we move out of the dreary and dull winter months and into spring. Spring-flowering plants, also known as early-blooming plants, are the first to bloom after a long, grey winter. It is no surprise that these early-blooming plants are a must-have for many gardeners – after all, they are a cheerful reminder that spring is just around the corner! Read on to find out our top picks for the best spring-flowering plants.

What are spring-flowering plants?

Plants that bloom in the early spring, between January and April, are known as early spring flowering plants. The term encompasses not only flowers and shrubs, but also woody plants and trees that bloom during this time of year. Spring blooming plants are especially common in forests. These spring-flowering plants in the forest can take advantage of the unfiltered light at the start of the year when deciduous trees have yet to form new leaves. Other early bloomers flower this early in the year because they grow in dry climates. In such climates, there would not be enough water available for flowering later in the year. As a result, early bloomers frequently have storage organs, such as bulbs, tubers, or rhizomes, to ensure that they have enough energy for spring budding.

Anemones (Anemone), commonly called windflowers, are one of the most popular plant genera in gardens with nearly 120 different species. The Balkan anemone (Anemone blanda) is a spring-flowering anemone that produces white, violet or blue flowers as early as February when in a sheltered location. Our native wood anemone (Anemone nemorosa) also opens its white and pink flowers from the end of February. Both of these early spring-flowering anemones are considered bee-friendly and prefer sandy, humus-rich soil and bright shaded areas.

Caution: It is important to pay attention to the exact species when buying anemones. Not all plants of this genus are spring-flowering plants – there are also some species of anemone which flower in summer or autumn.

What would spring be without tulips (Tulipa)? These colourful early blooming perennials appeal to almost everyone, regardless of whether you plant these spring-flowering plants in a pot or have a spot ready for them in your garden. With around 150 species and countless cultivars in almost every conceivable colour variation, there truly is a tulip for every gardener. Depending on the species, the tulip’s flowering time ranges from the beginning of April to the end of May. In order for tulips to open their beautiful blossoms, the right location is paramount. When planting tulips, keep in mind that their bulbs do not tolerate waterlogging, so use a loose, well-drained soil.

The crocus (Crocus) is one of the most well-known spring-flowering plants. Depending on the species, these white, purple or yellow spring-blooming perennials produce their first flowers as early as February. They not only offer some of the first splashes of colour in the New Year, but they also provide some of the first food sources of the year for our little pollinators. This is why many spring-flowering plants are considered bee-friendly. However, not all crocuses flower in spring – autumn crocuses are known for their late flowering from September to October. Fortunately, spring-flowering crocuses are fairly low-maintenance. When planting crocuses, make sure to plant them in a sunny spot with well-drained soil, and they will feel right at home.

If you are looking for wonderfully fragrant spring blooms, then you should consider planting hyacinths (Hyacinthus orientalis hybrids) in your garden. The hyacinth comes in blue, white, violet and a variety of other colours. Hyacinths are not only beautiful spring-flowering plants, but they also have a lovely sweet scent. The hyacinth’s numerous bell-shaped flowers that appear from April onwards also make it a favourite of bees. Hyacinths are excellent bee-friendly balcony plants because they prefer a sunny yet sheltered spot. Find out how to care for these spring-flowering plants in our article on caring for hyacinths.

When you think of white early spring flowers, the graceful snowdrop (Galanthus nivalis) immediately springs to mind. In nature, these early blooming perennials are most common in forests, but these days they are also found in many gardens. As it usually begins flowering as early as February, the snowdrop is not only one of the first signs of spring but is also very popular among bees and butterflies. This early-flowering plant prefers humus-rich, loose soil and likes to be situated under deciduous trees with plenty of light, so keep this in mind when planting snowdrops in your garden. The snowdrop is often confused with the spring snowflake (Leucojum vernum), which you can read more about below in this article.

From March to May, the flowers of the dandelion (Taraxacum officinale) provide little bursts of yellow to our gardens. Unfortunately, many people still think of dandelions as annoying weeds – but this spring-flowering plant is not only beautiful with its yellow flowers but is also very useful. The dandelion is an edible weed and has long been considered a medicinal plant that boosts metabolism. Rich in both pollen and nectar, dandelions are also bee-friendly. On top of that, they are not particularly picky about location so you can plant dandelions almost anywhere.

Tip: In addition to the common dandelion, there are several other dandelion species that also grow well in gardens. The white-flowered dandelion (Taraxacum albidum), which blooms from May onwards, is particularly pretty.

Almost every child is familiar with daisies (Bellis perennis), which is not surprising given their widespread distribution. Found in almost every lawn, this spring-blooming perennial bears its delicate white-petalled flowers from March to November. Daisies prefer nutrient-rich soil and full sun. Despite its low nectar and pollen count, the daisy is a favourite of bees and other insects due to its long flowering period, as it helps to bridge periods when food is scarce. Aside from wild daisies, there are also cultivated hybrid varieties that come in various colours and are suitable for the balcony or garden, such as the ‘Pomponette’ which has full-double flowers.

Despite having ‘spring’ in its name, the spring snowflake (Leucojum vernum) often begins to bloom as early as February. This spring-flowering perennial is a great addition to shady gardens in particular. Spring snowflakes thrive in nutrient-rich soil, but do not tolerate sunny locations. With its white bell-shaped flowers, this spring-flowering plant is also a very valuable plant for bees, as it is one of the first plants to flower after the winter months.

Primroses (Primula) are a colourful addition to any flower bed, even in wet and grey weather. From white to yellow to violet, primroses come in almost every colour you can imagine. As early-blooming plants, they often display their flowers as early as February providing some of the first pops of colour in the flower bed. Primroses also do well in pots and are therefore suitable for balconies if you can offer them a sunny or semi-shady spot. Native primrose species, such as the oxlip (Primula elatior), are considered to be particularly bee-friendly due to their high nectar and pollen content. Double-flowered cultivars, on the other hand, are not bee-friendly.

Tip: Primroses prefer very nutrient-rich soil. If you would like to grow primroses in your own garden, we recommend using a phosphate-reduced soil, such as our Plantura Organic All Purpose Compost, when planting them in the ground as garden soil usually already contains enough phosphate.

Winter aconite (Eranthis hyemalis) blooms at temperatures just above freezing. This yellow-flowering plant reliably flowers in February and March, even in bad weather. An early-blooming perennial, winter aconite is naturally found in forests on the continent but does well in gardens if planted in humus-rich soil around the edge or under the canopy of a deciduous tree. And this spring-flowering plant not only appeals to us but also to bees as it is rich in nectar and pollen and flowers early in the year.

The clematis (Clematis) is one of the last spring-flowering plants to bloom. Spring-flowering clematis species and varieties include the alpine clematis ‘Pamela Jackman’ (Clematis alpina ‘Pamela Jackman’) and downy clematis (Clematis macropetala), both of which flower as early as April. They prefer sunny and sheltered locations with well-drained soil. Clematis plants parade an abundance of purple and blue flowers. Like many others in this article, clematis is another bee-friendly flower and is popular among various other insects.

The pansy (Viola x wittrockiana) is a colourful classic that belongs in every garden. Pansies come in a wide variety of colours – from white to yellow to red or even multi-coloured specimens. They thrive in sunny to semi-shady locations with loose, moist (but not wet) soil, and can be grown in both pots and garden beds. However, unlike many spring-flowering plants, pansies are not bee-friendly.

Did you know: Whether pansies are considered early blooming or not is determined by when they are sown. Those sown in February flower from March onwards and are therefore classed as early blooming flowers. Pansies sown in early summer, however, bloom in autumn in October and November.

Another plant that delights us with its yellow blossoms early in the year is the cowslip (Primula veris). The cowslip flowers from March to May and has tiny, wonderfully fragrant yellow blossoms. These spring blooming perennials also attract butterflies who can easily reach the nectar with their long mouthparts, known as proboscises. Cowslips thrive in sunny locations and prefer humus-rich soil high in lime. Under these growing conditions, the cowslip is a low-maintenance, robust spring-flowering plant.

While not every iris blooms in the spring, fortunately the early bulbous iris (Iris reticulata) does. This spring flowering perennial opens its blue-violet flowers from February onwards. The danford iris (Iris danfordiae) is another early-flowering species that shows its yellow flowers as early as March. Both species prefer a sunny location with well-drained soil. In addition, both iris species are considered to be extremely bee-friendly early bloomers because they provide a vital food source early in the year.

Daffodils (Narcissus) are certainly among the most popular spring flowering plants and can be found in almost every garden. And no wonder! Not only do they brighten our gardens with their brilliant yellow spring blooms from February to May, but they also thrive in sunny locations with average garden soil. As they flower early and are rich in nectar and pollen, insects and bees in particular are also a fan of daffodils.

Tip: If you want to plant spring flowering plants in a pot, it is best to use a loose potting soil with extra phosphate. Our Plantura Organic Flower Compost is a peat-free and environmentally friendly option and ideal for potted spring blooming flowers. 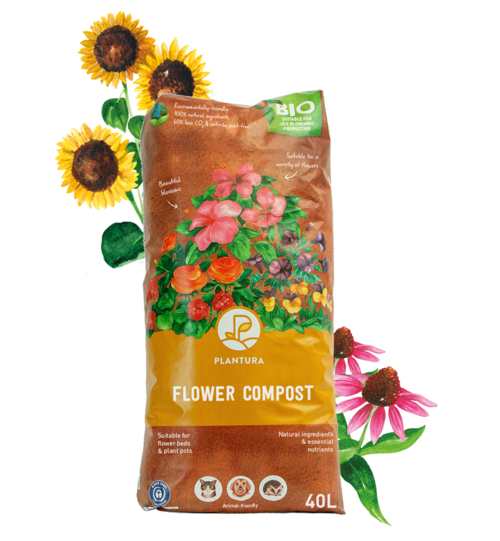 You may have heard of these spring blooming flowers, but did you know there are also some spring flowering shrubs and trees? 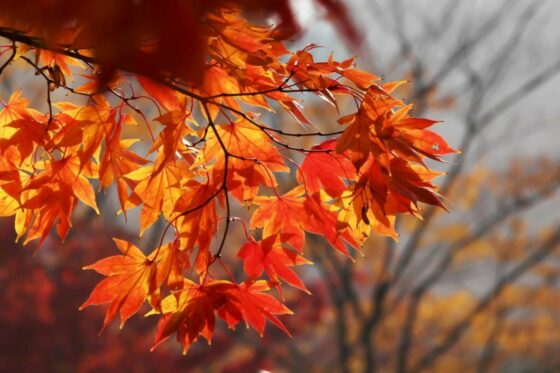 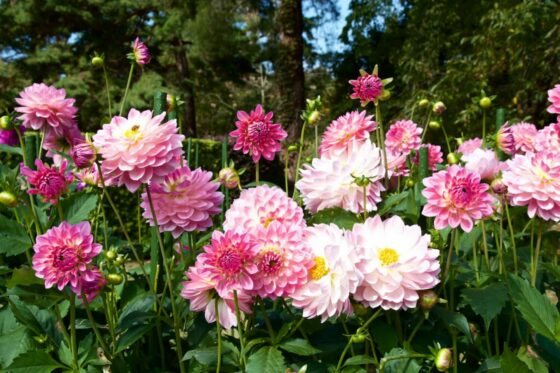 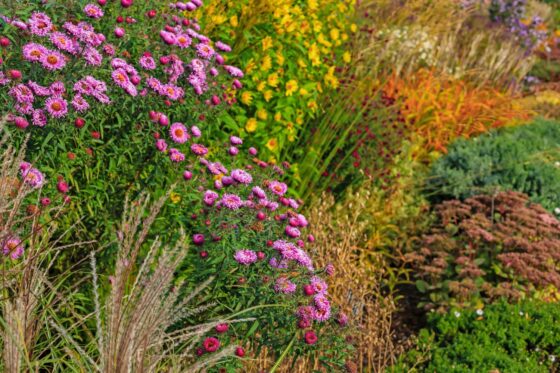 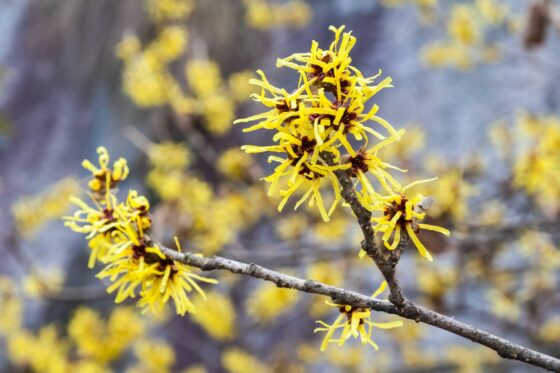 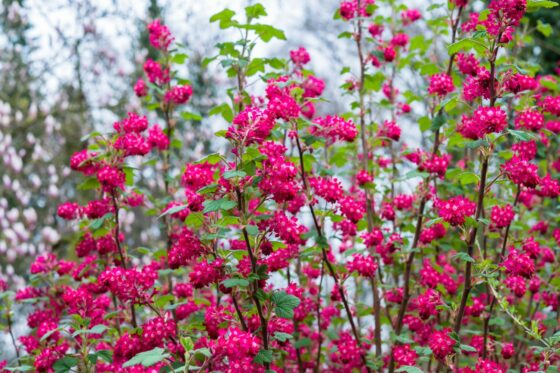 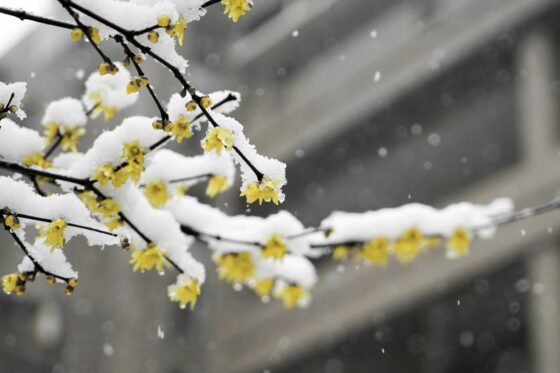