What is compost, what is it made of and how is it composed? We reveal everything about the formation, use and application of compost in the garden.

For centuries, humans have been making compost from various waste to fertilise their plants. As early as the 8th century BC, the Greek poet Homer reported on a fragrant dunghill that ripened in the farmyard of Odysseus, which was later spread in the fields. But what special and mysterious superpowers make compost so valuable to humans that it is sometimes referred to as the gardener’s ‘black gold’? In this article you will learn more about the formation and origin, properties and application of compost.

Compost is dead organic material that has gone through the process called rotting. During the rotting process, decomposition first takes place by air-breathing microorganisms. These break down parts of the organic material in such a way that it escapes into the air as carbon dioxide in gaseous form. In the process, the raw materials slowly break down into coarser parts and eventually even into individual molecules or atoms. These ‘elements’ are then turned into something new in the process of ‘humification’ – the formation of humus – namely humic acids (or humus molecules). These, taken together and chemically combined with clay particles, form visible crumbs and flakes that we can recognise as compost or humus.

You may now be wondering what exactly the differences are between humus and compost, which is a very valid question. In fact, the word ‘compost’ comes from the Latin compositum, which roughly means ‘that which is put together’. The name thus refers to the various basic materials that the composter – i.e. humans – uses to form humus. Compost is therefore a kind of humus. Humus, in turn, also forms naturally and is therefore not the same as compost.

What is compost made of?

Like everything that grows organically – i.e. animals, plants, fungi or even algae – compostable waste also consists of carbon compounds in varying proportions. The cell walls of plants, for example, consist largely of cellulose, hemicellulose and pectin. All three are carbohydrates, i.e. carbon compounds that also have oxygen and hydrogen bonds and are linked at the molecular level to form long, stable chains. When a cell wall is eaten and digested by microorganisms, the same thing actually happens as when we eat carbohydrates, for example in the form of a slice of bread: the carbon compounds are converted in cellular respiration to produce energy, and the carbon is then exhaled as carbon dioxide (CO2) together with water as an end product.

Summary: What is compost?

In general – depending on the degree of rotting – compost can be described as coarse and fibrous or brownish and crumbly and is often said to have a pleasant, ‘woody’ smell. It is about twice as heavy as peat and half as heavy as sand. Compost also has many medium-sized pores, which allow it to improve aeration in the soil as well as water balance. Depending on the raw materials, it can be slightly acidic, neutral or even slightly alkaline. The nutrient content depends on the raw materials and the maturation period: it can be very high or very low. Nitrogen, phosphorus and potassium – the three main nutrients of plants – can be in balance with each other, but often the proportions of phosphorus and potassium are greatly increased compared to nitrogen. Compost usually contains all the trace nutrients that plants need. The effect of compost fertilisation on soil and plants can also differ substantially: while a mature, low-nutrient, green compost sustainably improves soil properties by increasing humus content, a fresh, nutrient-rich organic compost is more usable for plant fertilisation because it releases many nutrients but does not increase the humus content in the soil.

Where does compost come from?

As mentioned above, compost is a man-made form of humus. Humus is also formed by the processes roughly described above at very many natural sites where sufficient organic waste and microorganisms are present. A special rule of thumb applies here: if the living conditions for the microorganisms involved are tolerable but not quite optimal, much more humus is produced than nutrients are released. And with this we have an explanation for thick humus layers in forests and bogs: at these locations, it is usually too acidic or too wet for microorganisms – besides, there are many other such humus-promoting locations. Humification can happen in your garden, too, if you know a little about controlling humus-enhancing conditions.

Compost worms and other composters

You have probably already got the right impression that composting is by no means a purely mechanical or chemical process, but rather a biological one. This is done collaboratively by various members of the ground flora and fauna. The number of organisms per volume is particularly high in compost as there is a real feast to be found here. One cubic meter of compost contains no less than 10 kilograms of living organisms! Groups involved include bacteria, fungi and other protozoa, roundworms (nematodes), insects and their larvae, mites, earthworms of various genera, isopods, millipedes and snails. Depending on the prevailing living conditions, the composition of flora and fauna may differ. Their tasks include the decomposition, humification, chemical alteration, mixing and degradation of organic pollutants. Of course, they do not do this to please us: rather, they come to feed and reproduce when they find optimal living conditions. This includes the presence of organic matter, adequate moisture and oxygen, a slightly acidic or slightly alkaline pH and temperatures that are as warm as possible. If all the organic matter has been converted to humus, they die or migrate.

Tip – Effective Microorganisms (EM): Various commercially available mixtures of widespread microorganisms (for example, yeast fungi and bacteria) are referred to as EM, which are intended to accelerate the necessary metabolic processes as an addition in compost, in Bokashi fermentation or in sewage treatment plants. For one use, the powder-based mixtures are combined with a sugar solution and kept warm for a long time. After that, the microorganisms are called ‘activated’ because the sugar solution allowed them to develop from their initial inactive permanent forms into active microorganisms and proliferate strongly. They are then poured over the material to be processed with the sugar water. Unfortunately, the effects of applying EM have not yet been proven and there are still reasonable doubts as to whether the observed results are really due to the microorganisms or simply to the sugar solution. For this reason, we cannot make a professionally justified recommendation for EM in composting.

Compost sold at recycling centres is recycled from green waste and organic waste from the organic waste bin. Depending on the product, low-nutrient and nutrient-rich materials are composted and sold together or separately. Green compost is lower in nutrients, while organic compost is higher in nutrients. There are also various composting systems, some of which process huge quantities of compost material. These range from traditional windrow composting and permanently implemented “travelling windrows” to pressurised aerated rotting towers or drums with volumes of up to 1,000 cubic metres that constantly circulate the compost material dynamically. Of course, not every recycling centre operates such a facility – they are only used in areas where a lot of material needs to be processed quickly.

Tip – Hot and cold composting: If there is a lot of compost material at one time, as in recycling centres, a new windrow, i.e. a compost pile, is made in one go. As a result, the decomposition processes do not take place in layers (as in the domestic compost heap), but rather together for all the material. As a result of the life processes of the microorganisms, a lot of heat is generated. In addition, a large compost heap has its own insulation, which can result in core temperatures of 60 to 80 °C. Since this phase of intensive rotting lasts for several weeks, the entire volume can be strongly heated once by systematic repositioning. In this way, pathogens and weed seeds are killed, so the compost becomes sterile. A private compost pile only reaches much lower temperatures due to the layered build-up and can therefore unfortunately transfer seeds and pathogens of plant diseases.

Make your own compost

Even without your intervention, humus is constantly formed in nature. However, you can take advantage of the underlying processes and produce a high-quality organic fertiliser or soil conditioner yourself, and relieve the burden on your organic or residual waste bin along the way. We have summarised in a few key words the steps you can take to create your own compost. All the necessary details on correct composting can also be found in this special article.

Compost tea is prepared in a similar way to how the Effective Microorganisms (EM) mentioned above are activated. However, the source of microorganisms is not a purchased mixture, but a few grams of compost. Sugar or syrup are mixed in water with compost and then left at 25 ° C for about a day. A good oxygen supply is important here, which is ensured by blowing in air or using a stirring device. Finally, in the broth, the microorganisms contained in the compost should multiply rapidly. You can then inoculate the soil or compost with it to promote biological activity here. Spraying the plants with compost tea is also recommended in various Internet forums, however, the intended benefit for the plants is rarely or only very superficially talked about. Microorganisms living in the soil do not find a habitat on the plant and would not colonise it on their own, which is why a positive effect seems unlikely at first. However, its use as a compost starter and to increase microbial activity in planting areas with a simultaneous input of organic matter (such as mulch) can have a positive effect. In particular, this applies to newly applied composts of very poor soils with low biological activity. It is questionable whether it would not have at least as great an effect to apply the compost itself.

Tip: Since many of the described effects of compost tea and EM have not yet been proven beyond doubt, few commercial agriculture and waste management companies rely on either of these methods. Nevertheless, products for larger-scale production for companies are already on the market. However, it is more of an alternative approach so far and we would advise against relying on anything its proponents tout. Over years of private and scientific applications, it has been proven in any case that the application of compost improves the soil.

Summary: Where does compost come from?

Spreading compost: how to use it properly

Compost has many beneficial properties that improve soil and plant growth. However, when applying it, always remember that compost is a collective term for various mixtures of material decomposed and humified to varying degrees, and that its properties are accordingly not constant. Basically, there are the following application possibilities:

Depending on the exact area of application, a different type of compost with different properties is best suited.

Compost can also be used in agriculture. The positive effect on soil health and harvests has already been demonstrated in various studies. One should really ask oneself why more of the “black gold” does not end up in pastures and fields. Like any other fertiliser, it is subject to laws, which regulate which quantities may be used at what time on which areas and for the cultivation of which crops.

This listing is compared with the nutrient requirements of the crop and future fertilisations are adapted to it. Nitrogen inputs and nitrogen removals reported annually in the “nutrient comparison” are offset against each other and should balance out as far as possible, or at least not exceed specified limit values. 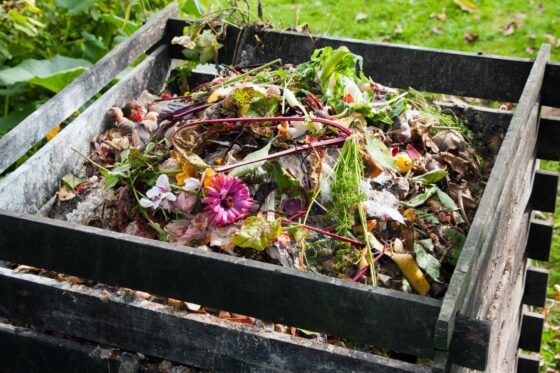 Composting: how to make compost at home