The ‘Bosc’ pear, also known as ‘Beurre Bosc’, has buttery soft, melting flesh, and is an ideal heritage variety for growing in your garden. Here you will find all you need to know about the ‘Bosc’ pear.

The ‘Bosc’ tree, also known as ‘Beurre Bosc’ or the ‘Kaiser’ tree, bears fruit abundantly, even in old age. Its pears are best enjoyed fresh due to their sweet, delicately melting flesh and short shelf life. Read on to find out more!

Origin and history of ‘Bosc’ pear

We do not know the origins of the ‘Bosc’ pear (Pyrus communis ‘Bosc’). However, botanists estimate that a chance ‘Bosc’ seedling emerged in Belgium or France at the beginning of the 19th century.

The pear was named after the director of Paris’ botanical garden: a man called Louis Bosc. However, in Germany, the pear came under the name ‘Kaiser Alexander’. It finally spread to the UK and the rest of the world under the name ‘Beurre Bosc’, meaning buttery ‘Bosc’.

The medium to large ‘Bosc’ fruits have a long, narrow neck that widens at the bottom, forming a bottle-shape. The flesh narrows towards a pointing stalk, which occasionally sits upon a small flesh bulge.

‘Bosc’ pears are in fact green-yellow, although this is usually hidden behind yellow-brown russeting, which forms a lattice and can cover most of the fruit. ‘Bosc’ skin is rather rough and dry, but this does not make the pear unpleasant to eat, because its white-yellow flesh is so juicy, sweet and delicious.

The ‘Bosc’ pear tree can cope with many different growing conditions, and is cultivated widely, even at medium altitudes. Preferring warm and nutrient-rich soils that are not too moist or clay-rich, the tree is best placed in sandy, loamy, or humus-rich soil. Notably, the tree can react sensitively to excessive quantities of copper and sulphur in the soil.

The ‘Bosc’ pear tree has moderately vigorous growth and a pyramidal crown. It needs annual pruning, so do remove old branches, and divert overhanging fruiting branches to more upright side shoots at least once a year.

You can cultivate ‘Beurre Bosc’ as a standard, semi-dwarf or dwarf pear tree. ‘Bosc’ is also a very popular espalier tree, although it is not ideal for this. Use the low-growing rootstock ‘Pyrodwarf’ for semi-dwarf or dwarf trees, and ‘Beurre Hardy’ for taller trees.

Tip: Do not use quinces as rootstock for this pear tree unless you are using an intermediary to graft ‘Bosc’ onto ‘Quince A’.

The wood of ‘Beurre Bosc’ is sensitive to frost, but the blossom is usually resistant to late frosts. The flowers emerge between April and May, so ‘Conference’, ‘Williams Christ’ pear or ‘Clapp’s Favourite’ are ideal pollinators of ‘Bosc’ pear trees. If you can, combine these trees in your garden so that each variety pollinates the other!

Tip: When protecting your plants from the frost, avoid products with high levels of copper or sulphur, as ‘Bosc’ is sensitive to these elements.

You can expect a medium to high yield with ‘Bosc’. The fruit is consistent and usually good quality. However, a natural all-purpose fertiliser, such as our Plantura All Purpose Plant Food, can improve the odds. This particular fertiliser has a low sulphur content (2%), which is ideal for the sensitive ‘Bosc’, and provides long-lasting nutrition, which means you will not have to repeatedly fertilise your tree. The ‘Bosc’ pear is ready to pick in mid-September, although it is ripe enough to eat from October. Pick ‘Bosc’ pears while they are still hard so that the fruit does not fall from the tree when it is fully ripe.

Store your fruit in a cool place, and you can enjoy their delicious taste until December or early January – the fruits keep at 0°C for two to four months. Larger fruits are best eaten straight from the tree, stewed or dried. They are not ideal for preserving, as the pears turn brown in the jar. 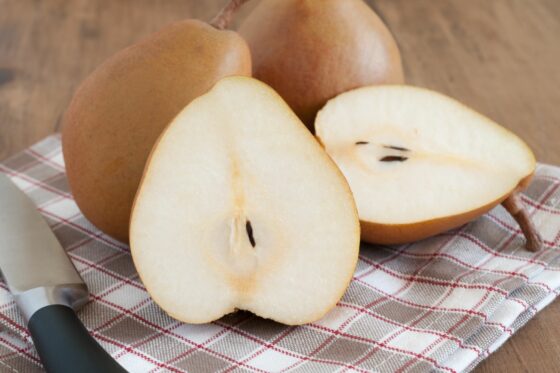 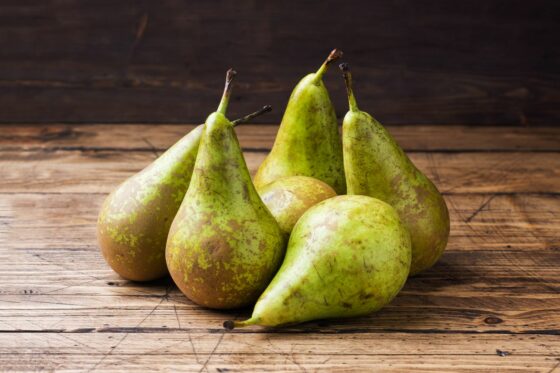