With its flowers, spiderwort (Tradescantia) beautifies whatever space it’s planted into. Find out where to best plant Tradescantia and how to best take care of it here.

Tradescantia (also known as spiderwort) is known both for its bold appearance and undemanding nature. In this article, you will learn which species are suitable for the home or garden and what small steps you can take when caring for spiderwort properly.

Spiderwort, which originates from South and Central America, arrived in Europe in the middle of the 17th century by sea. Also known as the spider-lily or inch plant, Tradescantia belongs to the Commelina family (Commelinaceae). This family is a genus of plants that includes about 65 different species. Like most members of Commelina, Tradescantia beautifies garden spaces as a lush perennial. Other species are popular as houseplants in hanging baskets because of their drooping shoots. Spiderwort’s leaves are attached directly to the plant’s base, are pointed, and depending on the variety, lance or ovular in shape. Leaf colour varies from light to dark green depending on the variety. Some varieties have a particularly decorative red leaf underside, which is why these varieties of the Tradescantia are grown just for the beautiful leaf ornamentation. There are also spiderwort species and varieties with multi-coloured leaves, such as the aptly named Tradescantia zebrina plant. The flowers of the Tradescantia species are mostly blue, purple, white, or pink. Spiderwort flowering time is anywhere from May to September, depending on the variety. The single, small flower blooms for only a few days, but this is not noticeable due to the large number of flowers and the rapid re-sprouting of buds and flowers. When grown outdoors, Tradescantia flowers also offer bees a rich supply of pollen and nectar.

The most beautiful Tradescantia varieties

The spiderwort genus is extremely diverse. The different-looking Tradescantia species range from small-leaved houseplants to reed-like perennials that like to grow at the edge of waters. Here are some of the most beautiful species.

Purple heart (Tradescantia pallida): The purple heart plant is native to Mexico and characterised by a striking stem and leaf colour, with a unique violet colouring. In order not to lose this impressive leaf colouring, the plant needs a full-sun location.

Small leaf spiderwort (Tradescantia fluminensis): The white-flowered small leaf spiderwort, also known as river spiderwort, comes from the tropical parts of South America and grows stocky with drooping shoots. Leaves and stems are glossy and monochrome green to green-white striped. In indoor cultivation, flowering is rare with this species. However, it is nonetheless decorative when left drooping over a hanging basket plant.

Inch plant (Tradescantia zebrina): Originating from Mexico and Colombia, Tradescantia zebrina is best known for its foliage. Its leaves are green and silvery-grey, occasionally with pink stripes. This variety makes for an excellent houseplant in a bright but not full sun location.

These winter-hardy Tradescantia cope with low temperatures and are therefore also suitable for year-round planting in the garden.

Tradescantia x andersoniana: This common garden variety is frost-hardy and easy to plant in the garden. There are several varieties that differ in flower colour. The ‘Bilberry Ice’ variety, for example, is particularly pretty, with white and pale violet petals. The ‘Sweet Kate’ variety, on the other hand, flowers in a very dark purple.

How to grow Tradescantia

The low-maintenance spiderwort does not generally make great demands of its location. But when the right location is chosen, depending on the species, spiderwort will grow without much care. Many Tradescantia varieties and species are not frost-tolerant and are therefore only kept as houseplants. The hardy species can be planted outside as exotic eye-catchers in beds or at the edges of ponds.

Tradescantia as a houseplant

The spiderwort’s leaf pattern makes it a visual highlight as an indoor plant, and if you keep it in a hanging pot, its long shoots are perfectly on display. Make sure that the room temperature remains between 20 to 25°C. Place the spider-lily in a bright but not sunny spot. In summer, the plant can also be kept on the balcony or terrace. Here, it is also important to ensure a location that does not expose the plant to full sun. In winter, spiderworts can be kept in a cooler place, but never below 10°C.

As a houseplant or potted balcony plant, spiderworts need a soil with specific natural and mineral components. A compost-based potting soil with sand and coarse bark pieces is ideal.

How to plant Tradescantia outdoors

Spiderworts can be cultivated as a lush perennial in gardens, parks, and flower beds as well as along pond edges and stream banks. That being said, only Tradescantia varieties with sufficient frost hardiness are suitable for planting in the garden.

Spiderwort plants are adaptable perennials and thrive in almost all light conditions. However, full sun and full shade locations should be avoided. In the garden as well as in pots, Tradescantia plants prefer a location in humus-rich and nutrient-rich soil. The soil should be able to store sufficient water, but should not tend to become waterlogged. As they like fresh, moist soil, spiderworts also feel at home on the banks of a garden pond.

Plant young spiderworts in the garden from mid-May so that late frosts do not weaken the fragile plants. Alternatively, planting in autumn is also possible. Those who prefer to grow the Tradescantia plant themselves from seed should start in mid-March before they can be planted out eight weeks later. Spiderwort plants prefer a single planting with 20 to 30cm spacing. As most species tend to grow quickly and bushy, gaps in the bed will close quickly. If the plant overgrows the bed, it is advisable to prune it back regularly.

How to care for Tradescantia

Tradescantia is not particularly difficult to care for. Above all else, make sure that the spiderwort plant always gets enough water. Add a little fertiliser and spiderworts will truly thrive.

Tradescantia houseplants don’t necessarily need to be pruned. However, if the plant becomes too unruly, it can be cut back any time. Make sure, however, that no more than one third of the shoot length is shortened. Old flowers could be removed regularly to encourage new flowering. However, it is important not to remove the flowering place itself, as this is where the new flowers will sprout again.

Indoor plants should be fertilised about once a month during their growth phase from April to August. To optimally supply roots and leaves with nutrients, our Plantura Liquid Houseplant Food, for example, can be added at regular intervals when watering.

Tradescantia’s soil should be kept evenly moist. As soon as the soil’s top layer dries, water with lime-free water. Excess water in the saucer should be removed after about 15 minutes.

Outdoor Tradescantia plants, on the other hand, should be pruned annually. The optimal time for pruning is autumn, when all the flowers and leaves have wilted. When all the spiderwort leaves have withered, shorten the plant to a height of 10cm. Removing the old flowers from outdoor plants also promotes an extended flowering period in the next season.

Fertilising outdoor spiderworts is rarely necessary when using a good soil. In the garden, compost or compost soil should be added regularly in spring.

Watering Tradescantia plants should be done at regular intervals to allow the plant to absorb sufficient water. This also depends on the location and the weather. Spiderworts that are, for example, on the banks of a pond need to be watered less frequently than those on drier soils. Water about two to three times a week and check the soil with the finger test before watering.

Non-hardy spiderwort, such as the boat lily (Tradescantia discolor) or the small leaf spiderwort (Tradescantia fluminensis) can be overwintered at warm room temperatures or somewhat cooler at temperatures of at least 10°C. Both indoor and outdoor plants should not be fertilised from autumn onwards. For indoor plants, watering should also be reduced in winter to prevent waterlogging and rotting.

How to propagate Tradescantia

The simplest method for propagating Tradescantia is to divide older perennials. However, cuttings or seeds can also be used to propagate the spiderwort.

Dividing Tradescantia plants is best done in spring or autumn. It is generally advisable to divide large plants in containers every three years, otherwise, the pot will quickly become too small. The plant can be roughly divided with a spade. Afterward, dead roots or parts of the plant should be removed, and both plants replanted in a suitable substrate and watered abundantly. With this method of propagation, you will get plants of the same variety and therefore with the same characteristics.

If you want to grow several plants at once, you can propagate them all year round with cuttings. To do this, cut off strong shoots about 10cm long and remove the lower leaves. Place the cuttings either in a glass of water or directly in soil. Depending on the pot size, there is room for up to 8 cuttings next to each other. Compost or universal soil is suitable for the young plants, with a third of sand mixed in. Roots will form quickly in a bright and warm location at 16 to 18°C. The first new leaves will appear. When the first new leaves appear, separate the plants and care for them like older plants.

Propagation from mature Tradescantia seeds is also possible. Outdoor plants often naturally propagate by self-seeding in the bed. Plants from seeds should be grown on a windowsill from mid-March. A temperature of about 20°C is ideal for germination, the period of which is usually 10 to 20 days. Spiderwort plants can then be repotted as indoor or outdoor plants, depending on the species.

Spiderworts are technically poisonous, but only to a very small extent to the point where they are considered harmless.

Tip: Indoors, it is advisable to hang spiderwort plants in a hanging basket so that children or pets do not accidentally ingest plant parts.

Tradescantia flowers are also excellent for shoreline planting. We present 20 pond plants, from the shore to the deep-water zone.

I study landscape ecology and through my studies have discovered a love for plants. Plants are not only beautiful, but also have countless fascinating survival strategies. To bring a bit of nature into my home as well, I nurture my houseplants and herbs on every possible windowsill.
Favourite fruit: rhubarb and all kinds of berries
Favourite vegetables: onions and garlic 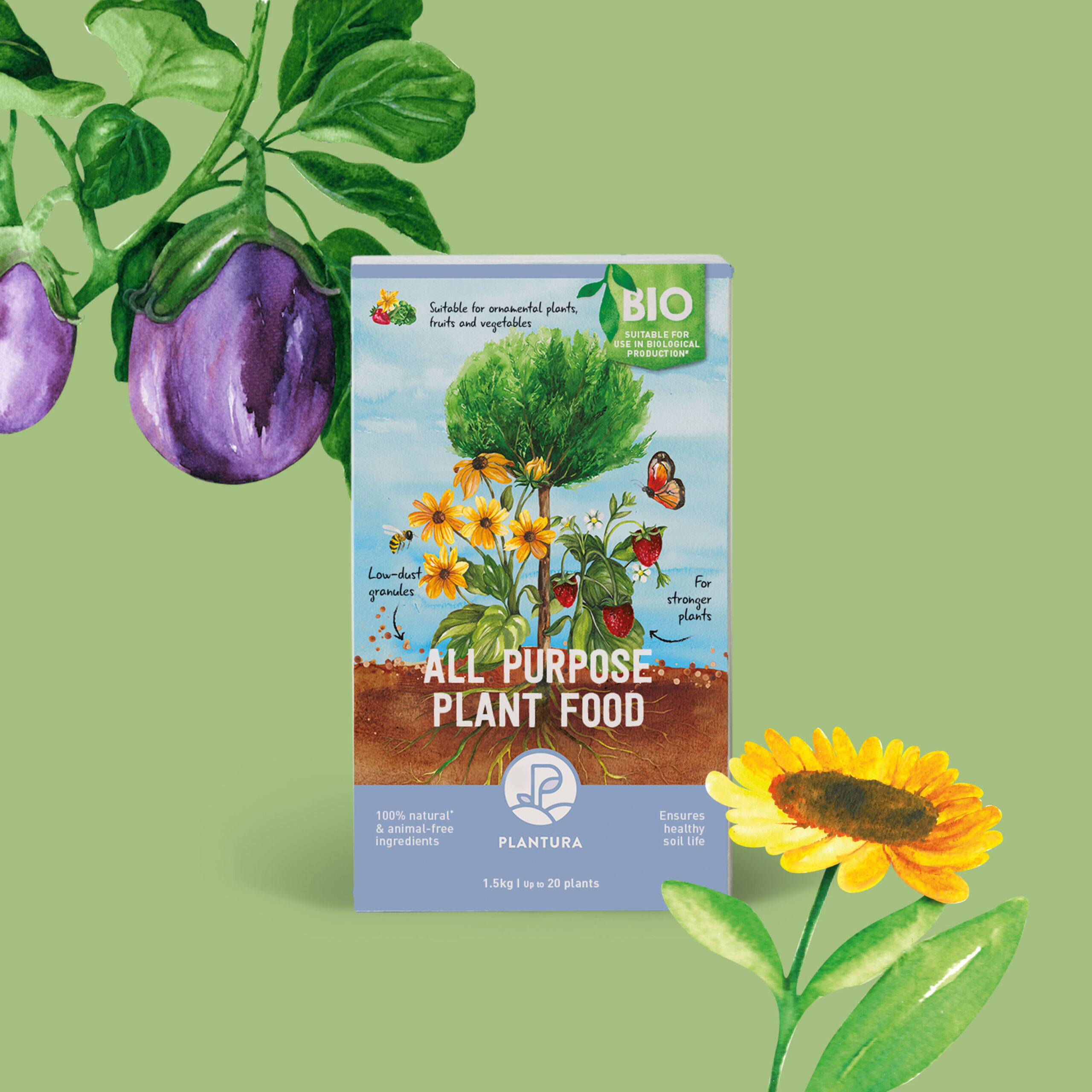