Rudbeckia is one of the most popular flowering plants and can be found in almost every garden. Get tips on how to care for Rudbeckia and how to overwinter these richly flowering perennial prairie plants.

Black-eyed Susan (Rudbeckia) is a hardy, flowering, and easy-care perennial. Find out everything about its origin, characteristics, and care requirements.

Rudbeckia, also known as black-eyed Susan, originates from various habitats in North America. These perennials prefer fresh to moist biotopes with deep soils, sometimes directly at the water’s edge, in savannah areas or mountainous regions up to 2800 m altitude. The plant has been known and popular in European gardens for centuries. These herbaceous plants, which grow to an average height of between 50 and 300 cm, spread by seeds, rhizomes, or root runners. Rudbeckia leaves grow alternately on the stem and are dark green in colour. They can be simple to deeply pinnately lobed with smooth, serrated or coarsely toothed margins. These members of the daisy family (Asteraceae) form numerous, elongated, deep brown tubular flowers with an elongated centre, which are framed by coloured, long, yellow, orange, or red-brown ray florets. This gives the impression of a single flower. Rudbeckia flowers from July to September, so they are an important food source for bees and other insects as their flowers provide nectar and pollen even in late summer and early autumn. After pollination, brown, black, elongated, square seeds form – the so-called achenes. In some species, the seeds have a parachute-like appendage known as the pappus.

Is Rudbeckia a perennial? Yes! However, some species are much shorter-lived than others, such as the brown-eyed Susan (Rudbeckia triloba). To discover more types of Rudbeckia and learn more about their individual characteristics and requirements, see our article on Rudbeckia species and varieties.

When it comes to plant care, the most important thing is to pay attention to the nutrient and water supply. Read on for tips on fertilising, watering and pruning Rudbeckia.

It is best to cut Rudbeckia plants back to the ground shortly before new shoots appear in spring, from about March onwards. This is because the seed-rich flowers serve as a source of food for numerous birds throughout the winter. Late pruning does not negatively affect winter hardiness, but if anything actually improves it. During the flowering period, Rudbeckia can be used as a long-lasting cut flower. To prolong the longevity of these flowering perennials, divide larger, bushier Rudbeckias every three to four years and move them to a different location.

Black-eyed Susan needs a nutrient-rich substrate to grow vigorously and flower abundantly. We recommend using a natural slow-release fertiliser to fertilise your Rudbeckia plants, such as our Plantura Flower Food. Apply this around the plant from March onwards when Rudbeckia is sprouting new growth. Lightly work it into the soil and water well. After about three months, apply a second, lower dose of fertiliser. Remember to only fertilise in spring and summer. Fertilising in autumn can negatively impact their winter hardiness and, depending on the weather, the plant will not be able to absorb all the nutrients.

Rudbeckias need a good water supply. They do not tolerate prolonged periods of drought well and grow poorly or perish in unsuitable locations. It is therefore best to plant your Rudbeckias somewhere moist to fresh. In the case of prolonged heat and drought – and especially with Rudbeckia in tubs or planting troughs – watering is the most important care measure. Do not let the soil dry out and avoid waterlogging.

Rudbeckias are generally not very susceptible to pests or diseases. In unfavourable years and especially on weakened plants, powdery and downy mildew and grey mould (Botrytis cinerea) can occur sporadically. However, on some species such as the Rudbeckia nitida, slugs can become a major problem. Especially after replanting young plants or in spring when Rudbeckia leaves are beginning to sprout, hungry slugs can severely damage these plants. To combat this, loosely apply slug pellets over a wider area between April and September after watering.

Rudbeckia is hardy to below – 23 °C, some species even to – 40 °C. It therefore rarely, if ever, requires winter protection, especially as the dead plant parts above ground also contribute to winter hardiness and protect the rhizomes and roots from frost. However, it may be necessary to provide winter protection to Rudbeckias in pots, as the small volume of soil can freeze through together with the roots. To help overwinter your Rudbeckias in pots, wrap them with jute or fleece and cover with a layer of foliage.

Rudbeckia is not poisonous and is eaten by herbivorous animals such as rabbits. However, for people with a known allergy to plants from the daisy family, there is a risk of allergic reactions or contact dermatitis. Unlike the coneflower (Echinacea), Rudbeckia is not used as a medicinal plant, but merely as an ornamental and is particularly popular in floristry.

Black-eyed Susan is easy to propagate yourself and can be combined with various perennials. See our article to find out everything you need to know about planting and propagating Rudbeckia. 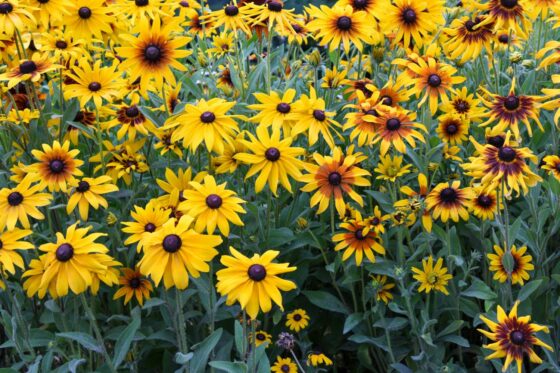 Planting rudbeckia: when, where & how