Anyone who has not yet taken a closer look at these popular early-flowering plants will be amazed at the diversity of species and varieties that make up the grape hyacinth genus.

How many grape hyacinth varieties and species are there?

The genus Muscari comprises about 60 species, including hybrid forms bred by crossing different species. Many of these varieties are found in Turkey, but they are also common in parts of Spain, Greece and other temperate regions. About 10 of these species are common as ornamental plants in gardens. Armenian grape hyacinths are especially well known and enchanting with a number of beautiful varieties.

The following is an overview of which grape hyacinth species and varieties have which characteristics and features. Check out our other article to find out more about how to plant and care for grape hyacinths.

The Armenian grape hyacinth is a naturalised species in parts of Europe and typically grows in alpine meadows, on rocky slopes and along sunny woodland edges. The soils in the natural habitats are usually dry during the summer and fresh in winter and spring from rain. The formation of daughter bulbs of these early bloomers results in 10 to 20 cm high clumps of flowers. The flowering time of this species is from the end of March to the end of April. Muscari armeniacum bulbs are suitable for planting in large groups as well as in pots. In sunny, warm locations with suitable soil, this species feels right at home and spreads quickly. In the garden bed, it will spread via daughter tubers and self-seeding.

The compact grape hyacinth prefers more or less fresh soils in full sun to partial shade. Unlike most other species, it has no daughter bulbs – it only reproduces by self-seeding. The scentless flowers bloom from April to early May and form lively bunches about 15 to 20 cm high. Compact grape hyacinths are also suitable for planting with other flowers along borders or sunny woodland edges as well as in pots. Planting Muscari in pots is recommended to prevent unwanted spreading.

This species of grape hyacinth is found mainly in the warmer regions around Europe. Common grape hyacinths prefer sunny to semi-shady locations with alkaline-rich soils and somewhat drier conditions. Due to propagation via daughter bulbs, this species forms clumps with heights of 10 to 20 cm. Common grape hyacinths flower from mid-March to mid-April. In suitable locations, the forming of daughter bulb and prolific self-seeding can easily turn into a beautiful sea of Muscari.

In many shops, these are often still sold under their previous name Muscari comosum. Tassel hyacinths are naturally found in the Mediterranean region in rocky ground and farmland, such as cornfields and vineyards. Tassel hyacinth thrives in sunny to semi-shady locations with well-draining mineral soils and dry to moderately dry conditions. With ideal conditions, the plants can reach considerable heights of between 30 and 60 cm. This species has an unusual inflorescence – the upper part forms a branching, purple mop of sterile flowers, while the lower part has horizontally protruding, plum-coloured, fertile flowers. These showy inflorescences can only be admired in May. 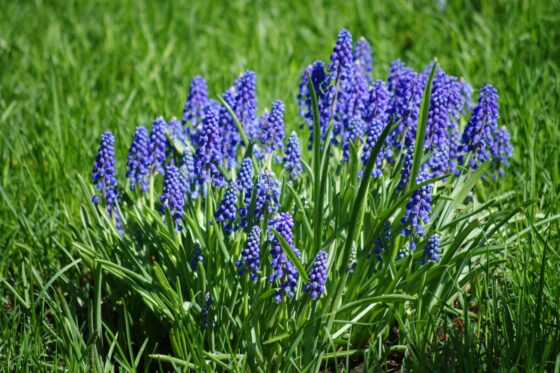 Planting Muscari & caring for its flowers 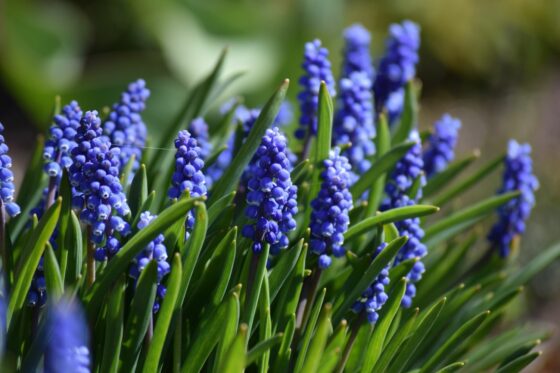